America will send a new generation of explorers to the moon aboard NASA’s Orion crew exploration vehicle, or CEV. Making its first flights early in the next decade, Orion is part of the Constellation Program to send human explorers back to the moon, and then onward to Mars and other destinations in the solar system.

NASA is teaming technology developed for the space shuttle with designs used for the Apollo Program to produce elements of the next spacecraft destined to deliver astronauts to the moon. One of these is the ablator heat shield.

Boeing Advanced Systems has completed a developmental heat shield, known as a manufacturing demonstration unit, or MDU, for Orion that is designed to protect future astronauts from extreme heat during re-entry into Earth’s atmosphere following lunar and low-Earth orbit missions.

The material used by Boeing for the heat shield is fabricated from Phenolic Impregnated Carbon Ablator, or PICA, material. Fiber Materials Inc., of Biddeford, Maine, produces the material under a contract to Boeing. PICA is being considered for Orion’s heat shield due to its proven performance on NASA’s Stardust spacecraft heat shield. Stardust was a small robotic spacecraft that successfully completed its mission of obtaining comet samples and returned to Earth in January 2006.

The Boeing thermal protection system MDU consists of an integrated concept made up of multiple PICA components. Each piece is significantly larger than typical space shuttle tiles, greatly reducing parts count and complexity. The actual final number of PICA blocks will be determined by both manufacturing and thermal-mechanical design constraints. Designers also plan to include gap fillers between blocks, just as with the shuttle.

Boeing installed the MDU onto a NASA-provided surrogate carrier structure representing the size and shape of the flight heat shield structure, but fabricated from alternate materials pending development of the final flight structure.

NASA chose an ablative heat shield that slowly burns off because it can handle higher temperatures than the shuttle’s reusable tiles. A spacecraft returning from a lunar mission is expected to encounter temperatures as high as 5,000 degrees Fahrenheit during re-entry into Earth’s atmosphere, compared to about 2,300 degrees for a space shuttle re-entry. Because of this, the Orion heat shield can only be used once.

Since pre-flight processing and launch operations for Orion will be led by NASA’s Kennedy Space Center, the MDU is now in Hangar N where it is undergoing nondestructive evaluation testing.

X-ray inspections of the PICA MDU at Hangar N are targeted for May. United Space Alliance will utilize a large 11-axis gantry robot to position X-ray machines and digital detectors at various points of interest on the MDU.

The PICA MDU was manufactured with many pre-determined flaws. They are in the bond line to the structure, in the gaps between PICA blocks, and in the PICA blocks themselves. X-rays should be able to detect many of these flaws.

Concurrently while X-raying the MDU, additional samples of PICA that are at Kennedy will be inspected with various NDE techniques for proof of concept. Once these methods have been shown to perform well, they will be evaluated on the MDU also.

Also, Kennedy has performed Surface Profilometry measurements to get a surface profile of the MDU to compare to the as-built CAD files of the MDU.

The PICA MDU heat shield is on a piece of ground support equipment that Boeing fabricated for use during the MDU fabrication at Huntington Beach. It has wheels on it, and is good enough to move the MDU around in Hangar N to get it into the X-ray booth.

An adapter that was fabricated at Kennedy will be used to put an MDU on a solid rocket booster aft skirt dolly if a major move of the MDU is needed outside of Hangar N. 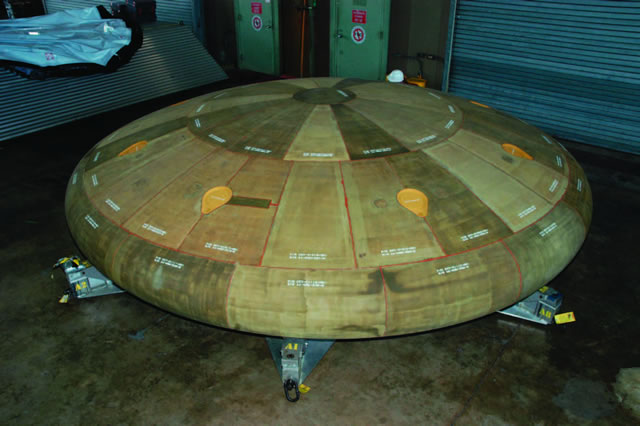 A developmental heat shield for the Constellation crew exploration vehicle, or CEV, is being prepared for a demonstration at NASA’s Kennedy Space Center. 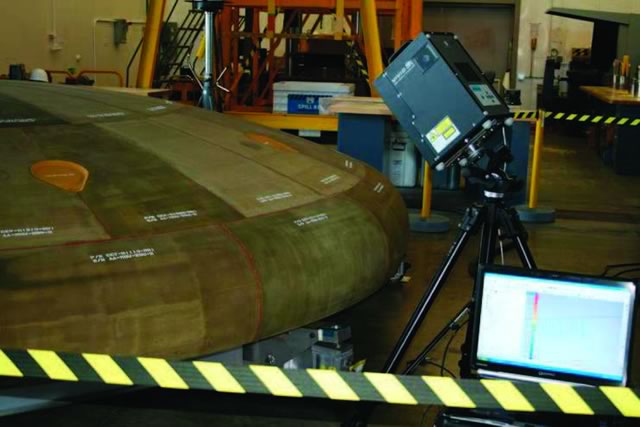 A laser scanner system at Kennedy is being used to obtain a surface profile of the MDU.