What You Need to Know About 3D Scanning

Picture being able to create a three dimensional digital replica of any physical object.

You don’t have to envision it any longer. Every day, thousands of companies are using 3D scanners and software to:

This is not science fiction. 3D scanners and accompanying software are now within the reach of many. Scanners are faster, less expensive and more accurate than its predecessors. 3D scan processing software is more automated, creates better results, and works faster than ever before. 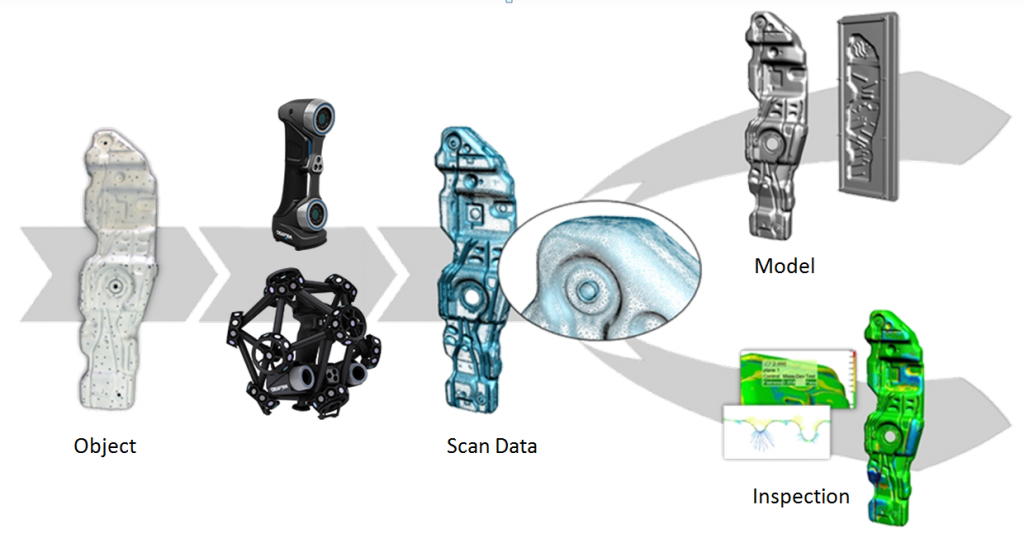 What exactly is a 3D Scanner?

The label “3D Scanner” is fairly vague, applying to any device that can measure the physical world by using light, x-rays, or lasers and be able to take those measurements to create dense point clouds or polygon meshes. Often times, 3D scanners may also be referred to as laser scanners, white light scanners, 3D digitizers, industrial CT, LIDAR, and many other names. The common denominator for all of these machines is that they take hundreds of thousands or millions of measurements to accurately capture the geometry of the physical world.

What is the purpose of 3D Scanning Software?

Because 3D scanners take several thousands of measurements, this equates to massive amounts of data. Dedicated software like Geomagic is needed to process the output into something usable that other software can handle. Depending on what the scan data’s end use will be, Geomagic can do many different things to the data. The most common applications for 3D scanning are reverse engineering, first article inspection, computer aided inspection and digital archiving or 3D printing/rapid prototyping. Dedicated software like Geomagic is the fastest, easiest way to unlock the full potential of a 3D scanner.

How Do These Machines Work?

This technology is based on the idea of using light to capture the geometry of the physical world. This can be done at a variety of different distances. Because the major component is light, different distances require different machines that can operate at those focal points. 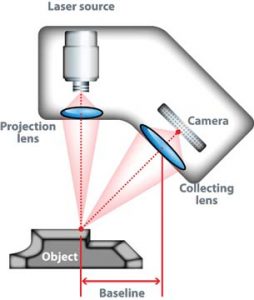 Laser triangulation scanners use either a laser line or single laser point to scan across an object. A sensor picks up the laser light that is reflected off the object, and using trigonometric triangulation, the system calculates the distance from the object to the scanner. 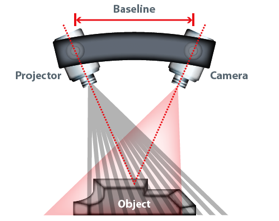 Structured light scanners also use trigonometric triangulation, but instead of looking at laser light, these systems use a projector to display a series of linear patterns onto an object. Then, by examining the edges of each line in the pattern, they calculate the distance from the scanner to the object’s surface. Essentially, instead of the camera seeing a laser line, it sees the edge of the projected pattern, and calculates the distance similarly.

Laser pulse-based scanners, also known as time-of-flight scanners, are based on a very simple concept: the speed of light is known very precisely. If we know how long a laser takes to reach an object and reflect back to a sensor, we know the distance between the emitter and the object. These systems use circuitry that is accurate to picoseconds to measure the time it takes for millions of pulses of the laser to return to the sensor, and calculates a distance. By rotating the laser and sensor (usually via a mirror), the scanner can scan up to a full 360 degrees around itself.

Laser phase-shift systems are another type of time-of-flight 3D scanner technology, and conceptually work similarly to pulse-based systems. In addition to controlling the pulse of the laser, these systems also modulate the power of the laser beam. The scanner compares the phase of the laser being sent out and then returned to the sensor.