What are the biggest benefits of a 3d scanner?

There are many benefits to 3d scanning services, and the significance of those benefits depends on the type of company that will be using the scanner. Companies that make medical devices and help save lives use these scanners, as do retail companies that are interested in making the next great product. You can also find the scanners being used by all types of research and development firms, because they can create new models faster and easier than ever before by using the 3d technology that these scanners offer.

It’s no secret that the scanning technology is expensive, compared to other options. Because these types of scanners have not been available for that long of a time period, they are still on the high end of their price point. As they become more readily available and more commonly used, the cost of them will come down. That will also happen because more companies will be using the scanners and more will be making them, as well. With a higher level of competition in the market, it only makes sense that the scanners will not be as expensive as they currently are for companies that need or want them.

It’s also important to note, though, that these scanners provide a great deal of benefit for their cost. They can do things that simply aren’t realistic for other types of scanners and other kinds of technology. That’s highly important, because companies that have these scanners may be able to get a leg up on their competition, and do more with the services they have. That can be a game-changer when considering how quickly a company can do something, and how successful that company will be at providing what its customers are looking for.

The Value of Rapid Prototyping Services

Among the biggest benefits of a scanner that offers 3d capabilities is the way a prototype can be made so rapidly. In the past it could take weeks or months to come up with something that would work, because of the way in which it had to be made. The trial and error that went into the process often took an exceedingly long period of time, and that could stop a company from getting ahead even when it was doing everything within its power to get a prototype done so further testing could commence. Rather than struggle with those types of issues, scanning in 3d has changed the game for many companies. 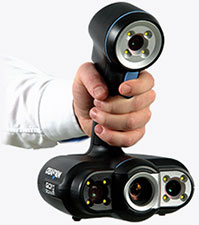 A faster prototype means a faster opportunity to get products to the market. That can mean staying well ahead of the competition, or at least keeping up if other companies already have the same type of technology and 3d capabilities. While a faster prototype doesn’t guarantee that there will be success, it does help ensure that the company is doing everything possible to see that success. In many cases, that is all that a company can realistically do, and it will have to be enough. Without the scanning technology in 3d, very little could get done that would help advance a company’s goals and causes.

Getting A New Product to Market

For any company that wants to be successful and needs to stay highly competitive with other companies in its industry, scanning in 3d is going to become even more important in the future. Products that get to market too late aren’t going to do customers any good, and the company that comes out with something new first will generally be the one to see those customers flocking to what they have to offer. Companies that provide similar products later will probably still pick up some market share, but they don’t have the advantage that was earned by the first company.

That’s very important to keep in mind, because scanning technology that offers 3d capabilities is costly, but it can be well worth the price. The company considering it will need to take a careful look at its industry and the market, because some industries are more focused on getting things to market quickly than other industries. If speed is not a factor, than the company may choose to hold off on technology, but speed isn’t the only way in which a 3d scan and the data that it creates can be used to help a company get ahead or improve itself over time.

The Wave of the Future

The largest benefit of scanning that allows for 3d technology is probably that a 3d scanner is the wave of the future. It’s what companies today will need to continue to use if they are going to be successful. It’s also what companies in the future will need, as it becomes more popular. While a company might be able to get away without using it at the moment, there will come a time when the company will basically have to use it, or that company will no longer be able to remain competitive. That’s important to realize, since it greatly affects how a company will plan for its own future and the costs it may have to incur as time moves along and customers demand more from their products and services, along with the companies that provide them.

Scanning technology has been around for some time, but only in 2d options. While that was perfect for documents and other two-dimensional objects, it did companies little good when they wanted to make a model of something that they could actually use to create a new product. It wasn’t until 3d technology became available for scanners that companies had the opportunity to do even more with their product and prototype design. The time for getting something to market is much shorter now, and that’s important because it means customers can get what they want faster. Companies can also start making profits faster, so they can more easily justify the benefits and the costs of purchasing a scanner that provides a 3d experience.