In order to overcome the limitations of today’s robotics, the U.S. Army Research Labratory (ARL) has teamed up with the University of Minnesota (UMN) to develop drones which imitate the movements of invertebrates such as squids and worms. Dr. Ed Habtour, a specialist in nonlinear structural dynamics at ARL, explains that the U.S. Army’s existing robots are inflexible when moving due to rigid mechanical and electrical elements in their designs. Because of this, they often struggle to perform in an urban setting where covert and flexible movements are key to success. 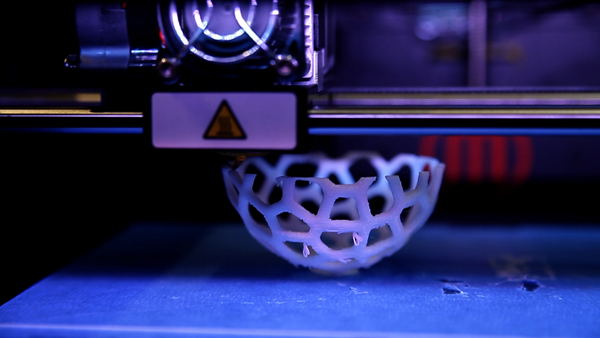 Before they could develop a drone that would move like a invertebrate, the research team was first tasked with developing flexible actuators. These actuators are critical as they convert electrical energy into physical movements and motions in robotics. Traditional actuators are generally composed of firm, inflexible materials which cannot move linearly or rotate.

“In the initial phase of the project, our team began by investigating new methods for emulating the locomotion of invertebrates, which provided fundamental insights into the machineries of their soft distributed actuation circuitries that allow for high bending motions without skeletal support,” said Professor Michael McAlpine, who studies 3D printing materials and devices at UMN.

Soft robotics is a very young field and developing these actuators was a very difficult challenge for the research team. Fortunately, the collaboration between ARL and UMN resulted in a major breakthrough. By 3D printing the actuators using a flexible materials, they were able to produce actuators with over 3 times the movement of existing actuators. According to Eugene K. Chow’s recent article, “The prototype featured 3D-printed actuation circuits encased in soft, stretchable material that can bend in any direction when electricity is applied.”

Although still in early developmental stages, the research team is confident that this soft robotic technology will soon be readily available. This would be extremely beneficial because the material used to produce the “squid drones” requires no heating, assembly or post-processing. Due to this, soldiers would have the ability to 3D print the drones on command, with minimal training.

“The research findings represent an important stepping stone towards providing the soldier an autonomous freeform fabrication platform—next-generation 3D printer, which can print functional materials and devices—to generate soft actuators and potentially tether-less soft robots on demand, on the fly, and at the point of need,” Dr. Habtour said.

Researchers within the Pentagon are currently exploring integrating 3D printing on the battlefield. Should this come to fruition, it would be a groundbreaking movement as the military would have the ability to 3D print anything from uniforms to food to drones and weapons. Members of the ARL research team are even exploring the possibility of sending robots and 3D printers ahead of soldiers to produce operating bases in hostile territories.

Given current technological abilities, these ideas are not far from becoming a reality. Already, the United States Marines are producing spare parts on-demand with 3D printing. The ARL hopes to soon develop a way for solider to 3D print mission-specific drones on the frontlines. They’ve even developed a pilot program with a user-friendly interface – very similar to a phone app – which allows soldiers to simply select a specific Unmanned Aerial Vehicle (UAV) and 3D print it for their specific missions.

“I think a lot of folks are interested in additive manufacturing [aka 3D printing] because we’ve seen on sci-fi shows … just walking up to a user interface and saying, ‘cheeseburger,’ and there’s my cheeseburger,” said Elias Rigas, a division chief in ARL’s Vehicle Technology Directorate. “I think that as additive manufacturing continues to grow and the technologies continue to evolve that we’re going to get to a point eventually where we will be making things in a similar fashion where you will walk up to your user interface and say, ‘unmanned aerial system,’ and it will make it for you.”