The Breakdown on Composite Materials 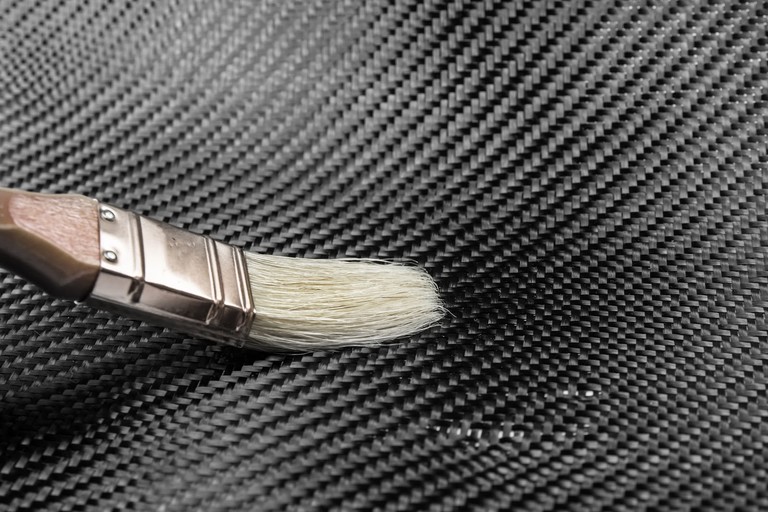 Composites are materials made from two or more substances that, when combined, have properties different from the original components. They are comprised of two main elements: a matrix and a reinforcement. For typical fiber composites, the reinforcement (carbon fiber or fiberglass, for example) is formed into the preferred shape and then covered with a matrix, often an epoxy or a thermoplastic, to retain its structure. Composites are beneficial because of the synergistic traits that arise from the combination of materials, allowing them to far outperform thermoplastics while maintaining low density. In fact, many carbon fiber layups are stronger than steel at one-tenth of the weight.

Markforged’s 3D printed composites are made up of two components: a matrix and a reinforcement. Our matrix is called Onyx, a nylon-based thermoplastic, and the reinforcement is one of our four continuous fibers. These reinforcement fibers include carbon fiber, fiberglass, high-strength high-temperature fiberglass, and Kevlar®. 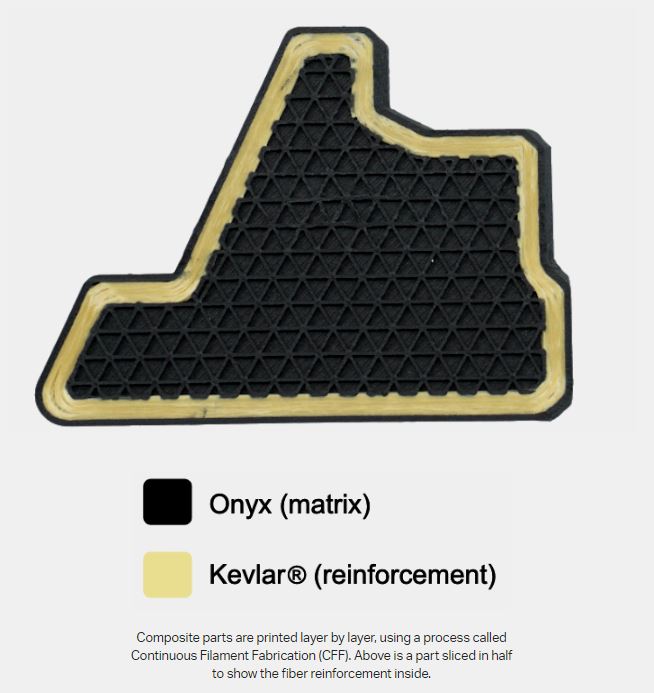 Fiberglass is Markforged’s entry-level reinforcement fiber. As the name suggests, it is composed of glass fibers bound together into a filament. Fiberglass is a good beginner reinforcement fiber because it is high-performing while remaining inexpensive. In flexure, fiberglass is four times stronger and eleven times more rigid than ABS. This offers an effective way to begin 3D printing industrial tools, fixtures, and workholding that require more strength than a thermoplastic would be able to offer.

Carbon fiber is the strongest and stiffest of Markforged’s reinforcement fibers. With a strength-to-weight ratio nearly twice that of 6061 aluminum, 3D printed carbon fiber parts can outperform those machined out of metal. Carbon fiber also deflects minimally when stressed, giving it an edge over aluminum which plastically deforms as it is loaded.

Because the strength of carbon fiber rivals that of metal, our customers often use it to print parts they would a normal machine. This includes soft jaws, end-use parts, and production forming tools.

Kevlar is a more specialized reinforcement fiber with unique qualities. It is extremely durable; parts reinforced with Kevlar can take a beating without failing. It’s also the lightest of Markforged’s reinforcement fibers, with a density 15-20% lower than the others. One of the most notable characteristics of Kevlar is its ability to plastically deform without losing strength. Kevlar-reinforced parts allow some give when loaded towards maximum resulting in a more gradual failure mode. For example, carbon fiber, which is stiffer, but much more brittle, fails completely and with no warning when loaded to its maximum. Kevlar, on the other hand, deforms until fibers begin to fail one at a time, providing a much more predictable failure.

HSHT fiberglass is another specialized reinforcement. As the name suggests, it is a heat-resistant, high-strength version of fiberglass. It retains its rigidity at temperatures up to 300 degrees Fahrenheit. HSHT also exhibits incredible impact resistance: 30x that of ABS and over 100x that of PLA. Additionally, HSHT fiberglass is our most elastic fiber; it will deflect as it is loaded, and then will return to its original shape when the load is removed. This is an advantageous property for parts that require repeated deflection without permanent deformation. 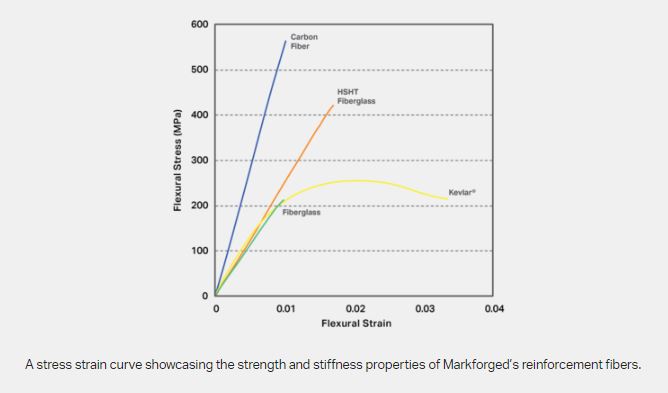 Composite 3D printing gives designers and engineers the ability to leverage a diverse set of material properties for applications throughout the manufacturing cycle. The specialized traits exhibited by the four fibers we covered in this post open up opportunities to apply additive manufacturing where it never has before.