In the creation of some of the most unique film characters like those in Avatar, Iron Man, and the latest RoboCop, Pacific Rim Hollywood’s special effect studio Legacy Effects utilizes 3D printing to bring those characters to life.

It’s fair to say, if you work on a Hollywood special effects team, it’s incredibly important to have access to the latest cutting edge technology. Remember, multiple suits of the lifelike models and characters are needed and must be readily available while filming.

One of the films out this year is the remaking of RoboCop; it’s the updated version and adaptation of the original film, where man merges with machine. The release of this film has once again, brought 3D printed prototypes to the big screen. The special effects artists used several Objet Connex multi-material 3D printer systems to bring RoboCop’s suit to life.

Every single aspect of the suit from the boots to the helmet was created by Legacy Effects artists with the help of the Objet Connex printer. If you watch the film, which is now on DVD, you are able to see clearly the 3D printed suit in action, as Robocop tackles crime.

In some of the scenes, the suit shown is made up of 90% 3D printed parts—amazing! Even the slick, gleaming visor with the red strip worn by RoboCop was made with Stratasys VeroClear materials. 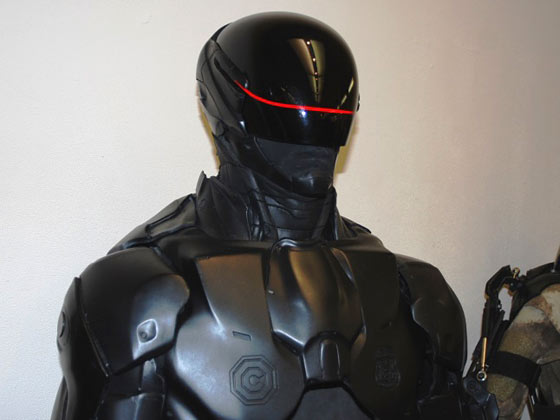 The team at Legacy Effects was able to work at a much quicker rate of production for the RoboCop suit parts. The time saved in comparison to making the suit by hand was simply remarkable. In the past, making the suit would have taken far too long leaving little-to-no time for testing it.

The advanced printer systems allowed the team to create the full right side, and then mirror it symmetrically on the left side making it a perfect match. This would have been impossible by hand.

Like a Chameleon, 3D printing has the ability to blend into whatever industry it’s needed. It has yet to disappoint on delivery of high quality results.