An interface bracket and coordinate transformation matrices were designed to allow the Range 7 scanner to be mounted on the PaR Robot detector arm for scanning the heat shield or other object placed in the test cell. A process was designed for using Rapidform XOR to stitch data from multiple scans together to provide an accurate 3D model of the object scanned. 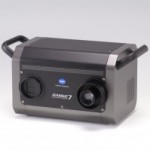 An accurate model was required for the design and verification of an existing heat shield. The large physical size and complex shape of the heat shield does not allow for direct measurement of certain features in relation to other features. Any imaging devices capable of imaging the entire heat shield in its entirety suffers a reduced resolution and cannot image sections that are blocked from view. Prior methods involved tools such as commercial measurement arms, taking images with cameras, then performing manual measurements. These prior methods were tedious and could not provide a 3D model of the object being scanned, and were typically limited to a few tens of measurement points at prominent locations.

Integration of the scanner with the robot allows for large complex objects to be scanned at high resolution, and for 3D Computer Aided Design (CAD) models to be generated for verification of items to the original design, and to generate models of previously undocumented items.

A novel feature is the ability to stitch images together by coordinates instead of requiring each scan data set to have overlapping identifiable features. This setup allows models of complex objects to be developed even if the object is large and featureless, or has sections that don’t have visibility to other parts of the object for use as a reference. In addition, millions of points can be used for creation of an accurate model [i.e. within 0.03 in. (≈0.8 mm) over a span of 250 in. (≈635 mm)].