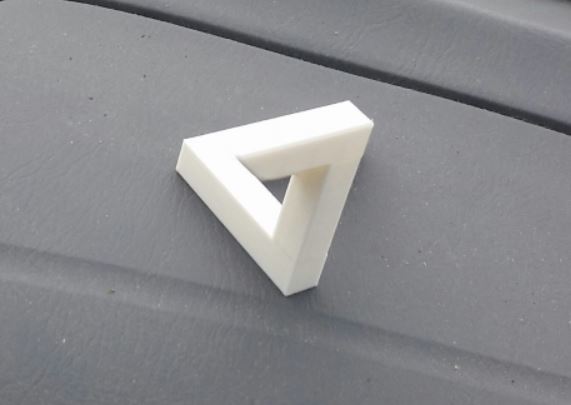 Before jumping to 3D Printing parts, it is recommended that the reader should have an understanding of the theory behind a 3D printer and how does the machine work to make sure the part that is printed does not fail. This area from the additive manufacturing field is very efficient, hence after reading this post, the reader will know why this area is very efficient.

3D printed parts are rarely solid. Most 3D printed parst are made with a closed-cell infill and a shell. These things save the material and print time without geting rid of the part strength. Now, so far you might be asking if the shell thickness or the densit of the infill contribute more to part strength or no? Well to answer that let’s look at the simple beam bending theory.

A basic loading case of a beam suspended from two points with a weight in the center.

So now the 3 points of contact the beam experience are as follow (also counting each support). This ends up forming a triangle, that looks like this:

When the weight applies a force in to the beam, picture it as if the forces are distributing along the triangular structure. The two angled segments get compressed, and the horizontal segment gats loaded in tension.

The forces distribute along the lengths of the triangle.

The base angle increases resulting in the tensile force to decrease. A thicker beam means that the same weight has less of an impact on the bottom face of the beam. The taller the beam the more capability said beam is able of handling larger loads than a thinner beam since the thickness of the beam reduces the stresses applied to its bottom face.

Starting from the neutral axis, tensile and compressive forces get larger as you approach a beam’s edge.

This information tells that if optimizing a beam for its strength and weight, material has the biggest impact on the top and bottom surfaces of the part, whereas the middle endures relatively little load. Especially in 3D printing, tensile loads are more important and easier to optimize for than compressive loads, because each extrusion behaves like a strand.

Circular tubing, box tubing, I-beams, T-beams are so common in construction. These structures save weight by only adding material where the highest stresses are in the part. For example, a box can handle loads from four sides, because it doesn’t matter which side you apply the loads from, there will always be face under tension and compression.

So, when thinking about parts and how they will bend remember:

A thicker beam is stronger than a thinner beam since the thicker the beam the less resulstant force it will face under the same load.

Fiber is like raw spaghetti. It behaves best in tension. String, chain, wire, silk or any kind of strand of material behaves the same way – it will buckle, deform, or break when bent or compressed under relatively small loads, yet strands can handle far higher loads in tension. The strength of a strand depends on the bonds a materia lamakes with itself and how that bond distributes stresses from applied loads. Yarn is made of shorter lengths of wool twisted togetherso when the twists come undone it will lose strength. Fortunately for 3D printing, an extrusion of plastic like the ones used in 3D printing, is as strong as the molecular bonds holding it together. A continuous strand of a strong fiber material like carbon fiber – with the fibers joined at the atomic level – will be stronger than a strand of filament that is a mixture of chopped fibers and plastic.

A traditional sandwich panel consists of a stack of 3 sheets – two “skins” of the same composition sandwiching a “core” or “matrix” material. Given what we’ve learned from Beam Bending Theory, the skins will experience most of the force when bent. So the skins of a sandwich panel are usually a strong, stiff material, while the core of a sandwich panel is often a weak but durable material meant to space the two skins apart.

In structural composites, the material with the strongest properties dominates the behavior of the panel where that property takes effect. So if your core was stronger than your skin, the skin material wouldn’t have very much impact, and would fracture or tear almost immediately under an applied load. This is why you never see composite fiber skins around metal matrices.

Because the largest forces are applied to the extremes of a beam when in bending, we want the skin of a sandwich panel to take the majority of the force, while the core experiences only minimal load. So this means the skin should be stronger than the core.‍

This makes a sandwich panel an effective, lightweight structure. Often higher-strength materials are more expensive. With a strong material only as the skin, it where it makes the most impact, so you save cost, material, and weight – adding your fiber material on the extremes of a beam maximizes its impact. As you thicken your skin material and it gets closer to the core, you get diminishing returns on its effectiveness. A strong material closer to the core doesn’t contribute to the strength of the part, because the material will experience much lower forces than skins further away. ‍

As we learned above, a bending force on a beam resolves to tensile and compressive forces on these panels. So the skin of a sandwich panel should be made of a material that performs well under tension — which is often easier to optimize for than compression. This makes continuous fibers a good fit for sandwich panel skins, because they are built and optimized for their strength in tension. Whether woven in sheets, formed into tubes, or 3D printed, a structure is created such that these fiber materials can act as the skin of a sandwich panel so that they can provide the most impact.