NASA’s aeronautical researchers are using the advantages of 3D printing to create new data that will deal with icing, a safety problem in the aviation industry. High-fidelity data of ice shapes generated on aircraft wings are documented through 3D scanning. Complex ice forms are 3D printed to better understand ice formation and how it affects airplanes.

This is a cooperative five-year research program that not only involves NASA but the Federal Aviation Administration (FAA), The French Aerospace Lab, and multiple U.S universities. The data will be available to the public in 2020.

Previously, ice research relied on generating ice in a specially equipped wind tunnel. Where chilling water droplets are blown over an airplane part and then freeze on contact. Under this method, the results of the ice shapes mimicked those formed in nature. They were documented and used to run computer simulations to study how various ice shapes affect the aerodynamics of an airplane.

“Our most common method was to cut a slice in the ice using a heated metal plate and insert a piece of cardboard into it, then trace the outline of the ice shape with a pencil” – Andy Broeran, icing engineer at NASA’s Glenn Research Center (GRC).

The tracings that came from Broeran’s method were fairly simple in their construction, and the fine details of the ice shape were lost. Consequently, the computer code could not fully represent the real-world experience. Researchers have attempted several methods such as molding and casting throughout the years to try to produce and measure more complex ice shapes. 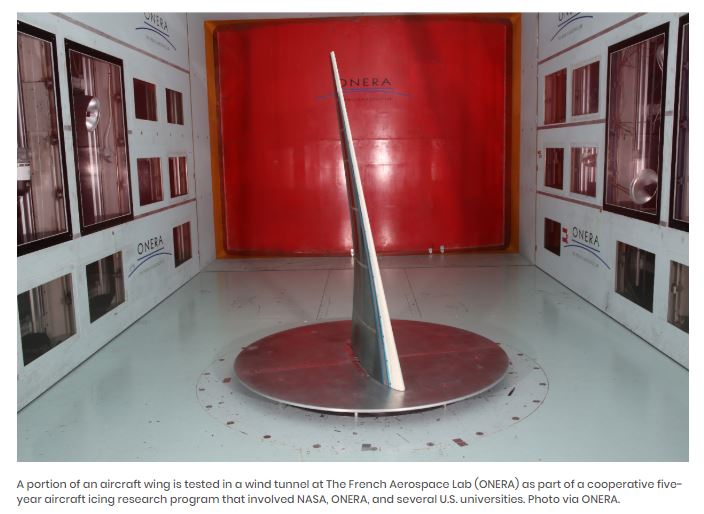 3D printing is already being used by NASA to produce chemical sensors, rocket engines, and soft robots for space missions. But now they’re using 3D printing as a research tool to get a better understanding of ice formations and their effects on an airplane.

“If we can improve our understanding of how ice forms and affects aircraft in flight, that higher fidelity data could help us in several important ways.” – Broeren

The benefits of 3D printing: 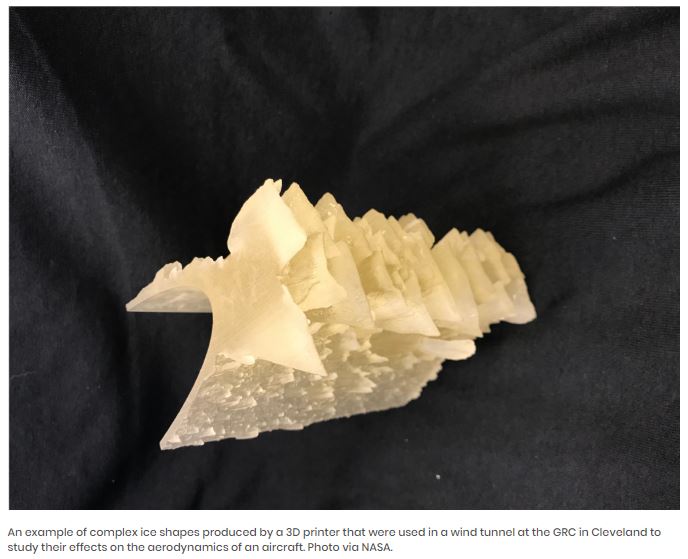 The adjustment will improve the safety of aircrafts and lower the development of costs for airplane manufacturers. The 3D icing research project began in 2015 using the icing wind tunnel at GRC. Inside the tunnel, the team uses 3D scanning to measure the ice shape generated on a large-scale wing section. 3D models of ice on aircraft are built and manipulated in computers. Then accurate ice sculptures are 3D printed by a contractor.

Research and tests ending in 2018 at the France ONERA’s wind tunnel. Now, researchers have been compiling, refining, and sharing their results. The final data will become available in 2020 when the five-year agreement ends on May 31, 2020

Learn How 3D printers & scanners can help you.