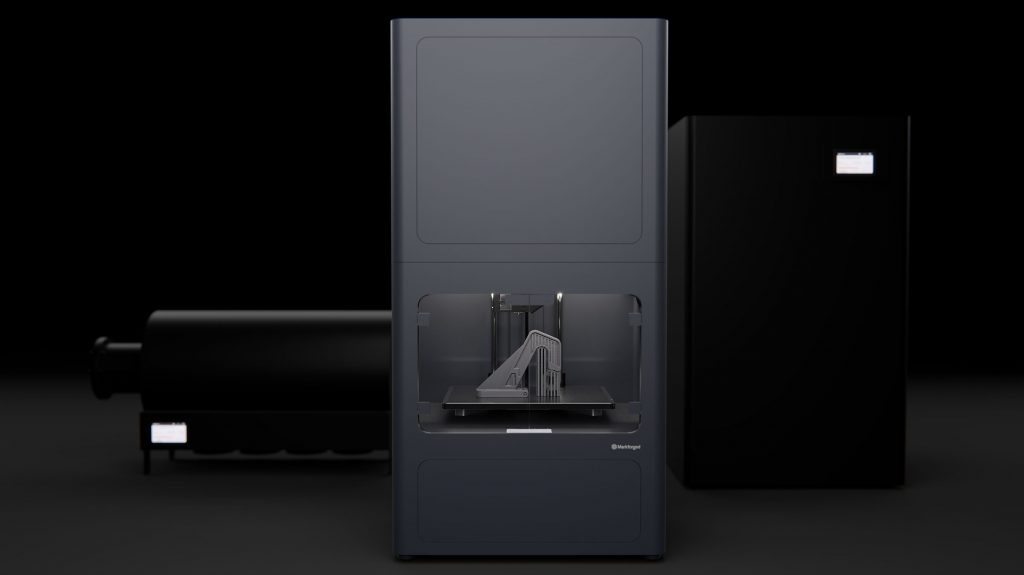 Markforged was the pioneer for carbon fiber 3D printing which aided them greatly in the development of Metal X. Their innovations have helped them create a very compact Metal 3D printing systems that produces parts with the same quality as other metal printing alternatives, but faster and cheaper. It also completely removes the need for any environmental controls that can often be very complex.

STANLEY Infrastructure manufactures more than 150 different handheld hydraulic tools and over 30 different mounted impact tools, making it the world’s biggest hydraulic tool manufacturer and the worldwide leader in the market. STANLEY Innovation’s engineers partnered with Markforged in order to produce their complex, low volume parts both faster and cheaper. STANLEY tested the effectiveness of the Metal X 3D printing systems on two of their parts. After producing these parts, they estimated that their cost savings were more than 95% and the parts were up to half the weight of those produced using traditional manufacturing methods.

“For our team, the Markforged Metal X printing system requires minimal capital and time investment to make the parts we need,” said Harry Zhong, Technical Lead, STANLEY Infrastructure Innovation team. “With Markforged, we believe that we can save thousands of dollars per year per part while retaining the quality and reliability we expect from traditionally machined parts. These kinds of innovations from Markforged are going to fundamentally change the way we think about manufacturing.”

NeoMetrix Technologies is your source for Markforged 3D printers.

“Markforged systems, such as the Metal X, are changing the way businesses produce strong parts while dramatically impacting the delivery times, cost, and supply chain logistics.” said Greg Mark, founder and CEO of Markforged. “We’re thrilled that STANLEY Infrastructure recognizes the value in the acceleration and cost savings that 3D printing low volume metal can add to traditional manufacturing processes.”

Parts printed on the Metal X have the potential to save industrial customers significant capital if utilized correctly. By designing intelligently and minimizing print time, companies such as STANLEY Infrastructure can produce high quality parts much more cost effectively.

About Markforged
Markforged is the leading manufacturer of industrial 3D printers. With Markforged composite and metal 3D printers, businesses can quickly and affordably print parts strong enough for functional prototyping, tooling, fixtures, and low-volume end-use production, including embedding continuous carbon fiber for parts 23x stronger than aluminum. Founded in 2013 and based in Watertown, MA, Markforged has over 150 employees globally, with a total in $57 million in both strategic and venture capital.