The Marine Corps’ advanced logistics team, NexLog, has unveiled a new drone program in which it hopes to develop the ability to create drones cheaper than a cell phone, using 3D printing technologies. Imagine having the ability to simply 3D print full drones, or parts to repair damaged ones, in just a matter of hours at a very minimal cost. This would open up incredible opportunities that can potentially save lives by providing unmatched surveillance.

Cpl. Rhet McNeal of the NexLog team was tasked with finding this ability when he was sent to San Francisco, California to experiment creating an unmanned scout drone with modern design tools. Of course, the Marine Corps has had surveillance drones for years, using the RQ-11 Raven on scouting missions across Iraq and Afghanistan. Kelsey D. Atherton describes the flying process:

“It’s tossed like a javelin into the air, and if the toss works, it can then fly at speeds of up to 50 mph, at ranges of up to 6 miles, and feed video back to the operator the entire time. (If the toss doesn’t work, and the Raven gets hurtled to the ground, it can sometimes break in an expensive way). It’s also, in the world of military drones, tiny, with just a 4.5 foot wingspan and weighing just over 4 pounds. Still, not everything about the drone is small: an individual Raven drone costs over $30,000, and a whole Raven system including three Ravens and a ground control system can cost up to $250,000.”

In the case of military drones, size does matter – the smaller the better – and the RQ-11 Raven fails to satisfy this need.

“The Raven comes in two huge pelican cases,” says McNeal. “I’m in a Combined Anti-armor Team which means that we ride around in trucks a lot. The amount of space we have in the truck for all of our suit, water, more fuel, our actual packs, those things take up a lot of space, and then you have ammo. It makes it where you can’t fit those two pelican cases in there.” 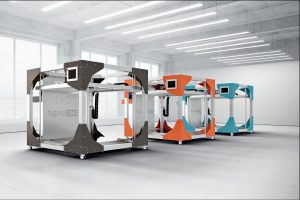 The inconvenient size and troublesome transportation of the RQ-11 are part of the reason that NexLog has been inspired to create this a new scout drone. Adding even more to there inspiration is the huge expenses the RQ-11 requires when it is broken.

The Marine Corps Logistics Innovation Challenge was created to crowd-source innovative new ideas using 3D printing and wearable technologies. Last year, McNeal participated in the “Make Your Corps” challenge which tasks entrants with satisfying the following questions: “With the right tools and instruction, what might a Marine make? Would these solutions improve warfighting capability, either while in garrison or forward deployed?”

McNeal’s idea was to create a drone capable of performing many of the things the Raven does, just at a mere portion of the price and with a more transportable design. McNeal found inspiration for this in Alejandro Garcia’s Nomad drone, a drone with a simple, modular design. Because of this modular design, users are able to simply breakdown and reassemble the drone quickly and easily 3D print replacement parts for damaged components. McNeal made some necessary adjustments to the Nomad design, and was selected as one of the challenge’s winners.

The Marine Corps embraced this design, partnering with a 3D printing company residency program in February of 2017. By the end of residency in June of 2017, they had developed a new 3D printed prototype of McNeal’s drone, naming the device “Scout. The end of the residency meant a prototype in hand and design files ready to send to his fellow Marines for feedback, testing, and refinement…The entire system is $615,” says McNeal. “If a wing section breaks now instead of being $8000 it’s like $8. That works out a lot better for us.”

The Scout features both an open-source controller and software with the only payload being the camera. There are some limitations of the Scout compared to the Raven however:

These things aside, however, a new Scout can be created for under $1,000 and provides Marines with the ability to scout the area ahead of them. This undoubtedly can be used to boost both the security and safety of soldiers on patrol. These benefits could be exponential as the Army recently banned the use of DJI drones due to fears of vulnerability and cyber-security in the popular quadcopters that are made in China.

“We don’t have a perfect answer, won’t for a while,” says Captain Christopher Wood, the Director of Innovation at NexLog. “The technology within the drone world is moving so rapidly that it’s hard to predict anything. We need to understand the risk we’re accepting in the technologies we use.”

SCOUT DRONE, DISASSEMBLED Based on the modular “Nomad” design, the “Scout” is made of small printed parts designed to be easy to assemble in minutes.

With the short range and simple controls of the Scout, the risks of it may be small enough to continue developing the design from 3D printed prototype to manufactured machine – with the ability to rapidly produce spare parts using 3D printing. These abilities would undoubtedly aide Marine Corps Commandant Neller’s vision of “a drone in every squad,” all at a mere portion of the cost of the existing drone designs.

“Trying something new, such as this crowd-sourcing approach, 3D printing, embracing small drone technologies, it’s not that those technologies scare us,” says Wood, “it’s that it requires us to rethink how we’ve been doing business for a long time, and that becomes a little bit uncomfortable.”

Looking past McNeal’s cutting-edge Scout drone, the Marine Corps has now built 3 maker labs, one at 29 Palms, one at Camp Pendleton, CA, and one at Quantico, VA. They have also created a mobile maker lab which Wood’s office sends all over the country. This mobile lab trains 8 marines at a time in a vast range of things including 3D printing, electronics building and welding. For troop training, some marines have used 3D printing to create munitions that maybe be encountered in the field. Other marines are actually training to 3D print drones in order to be better prepared in the field.

According to Atherton, “All told, according to Wood, there are 40 different Marine Corps units including maintenance, intelligence, infantry units, special operations, and even a tank battalion employing 3D printers on a fairly routine basis. With the tools in hand, the Marines themselves are designing and printing the parts they need, from better radio knobs to missing drone parts to training tools, so they can best perform the tasks they’ve been given.”

“I can’t dictate those solutions while sitting in the Pentagon, I won’t understand the full spectrum of solutions,” says Wood, “but the Marines on the ground will, especially when you aggregate them across the Marine Corps.”