When Dippy was unveiled at London’s Natural History Museum in 1905, it was an instant sensation. Being one of the main attractions for 112 years, the Diplodocus skeleton has become famous around the world through appearances in cartoons, news reports, and even playing starring roles in film and television productions.

In 2016, it was announced that Dippy would be retiring to be replaced by Hope, the skeleton of the Earth’s largest living mammals, the blue whale, to be suspended from the ceiling of Hintze Hall, Dippy’s home since 1979. 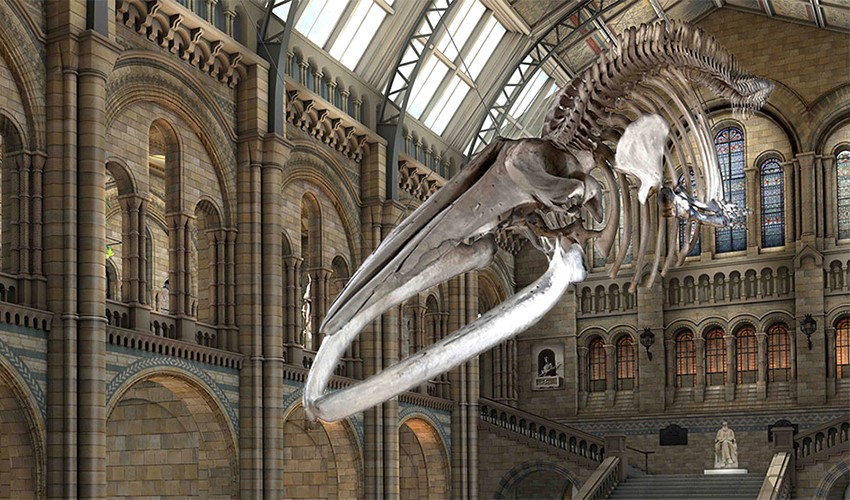 In preparation for exhibiting the blue whale skeleton, scientists from the Natural History Museum’s core research laboratories needed to 3D scan the skeleton components, particularly its huge skull. Even though they already had purchased 3D scanners for other projects, it was only suitable for items ideally placed on a work-table, making up most of the museum’s scanning needs. Since the blue whale skull measured around 6 metres in length, the scientists recognized the limitations of the technology they had available. They called upon the expertise of Measurement Solutions to assist them with their 3D scanning project.

They needed technology that could accurately scan a large animal skull while being suspended in an aircraft hangar. They also needed to take into consideration that it would most likely be moved during the scanning process and that there was also a limited time window in which the work could be done due to the tight time constraints on getting the blue whale ready for display. The museum’s scientists also stipulated that the engineers must not apply any kind of coating or spray to the skull or substructure. Basically, they wanted to scan a large-scale part without spray or coating, in adverse conditions, with high accuracy, as quickly as possible and needing to be right the first time.

The work presented an unusual challenge but Measurement Solutions was up to the challenge and presented a 3-step action plan to manage and facilitate the work as efficiently as possible.

First, the engineers started by laying out a series of small reflective targets on and around the skull. Using a Creaform photogrammetry system, they took a series of digital photographic images used to compute the exact locations of every target. This provided the engineers with a reference frame that would remain permanent throughout the whole 3D scanning process, which was scheduled to take several days. As time went by, it became evident that this simple process served to result in the engineers being able to drastically reduce the time needed to scan the skull.

One of the big advantages of using the MaxSHOT 3D photogrammetry device was the fact that the skull was suspended using wires, and therefore it was susceptible to movement. As some of the targets had been applied directly to the skull and the associated framework, if anything was to move during the scanning process the skull and the photogrammetry targets would move in unison, thereby maintaining the reference between all the scan data sets and removing the need to re-scan areas. This process, known as Dynamic Tracking, also eliminates the complex and time-consuming best-fitting of multiple scan areas associated with most 3D scanning devices, always maintaining the accuracy and integrity of the scan data.

Once the first step was completed, a process that took less than one hour, the skull was ready to be scanned. However, the framework holding the large cranium area included shiny and glossy black areas which are aesthetically pleasing but not usually ideal for scanning such a large area, quickly and accurately, without using spray, and to a resolution that was suitable for the museum’s needs. To solve this problem, Measurement Solutions suggested the MetraSCAN 3D™ hand-held optical CMM 3D scanner. Comprising 14 high definition laser scan lines, MetraSCAN 3D can scan any kind of surface extremely fast, as the lasers automatically adapt to the surface’s reflectivity and color, removing the need to apply anything beforehand, much to the relief of scientists (and engineers) involved. The multiple laser lines can also capture scan data typically up to 25 times faster than scanners that only utilize a single laser line. Being completely hand-held and having no limitations imposed by a connected arm, the 3D scanner is “tracked” in space by a tripod mounted digital imaging device known as the C-Track™, which provides the user with a scanning volume of over 15 m3 from a single set-up. 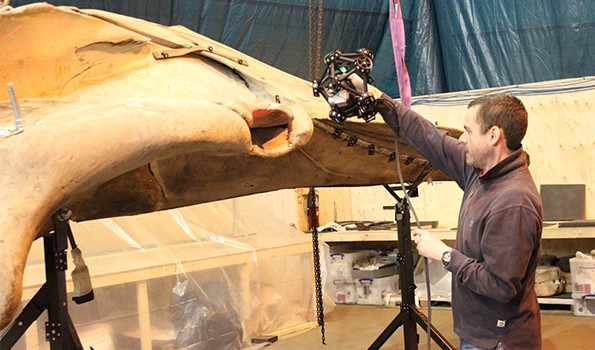 Engineers perform 3D scanning on the skull of the exhibit.

In the case of the blue whale, even the standard scanning volume of the MetraSCAN 3D was not going to be enough to deal with such a complex shape, which is why the engineers performed the MaxSHOT 3D operation in advance. By having coordinated targets located around the skull, the C-Track can be moved anywhere in the area. As long as it detects some targets, it will automatically calculate its location and orientation relatively to the previous scanned data using a triangulation method, maintaining accuracy at all times, and enabling the engineers to carry on scanning regardless of where they are around the skull, even if the skull was moved during scanning.

Throughout the scanning process, the engineers fully utilized the Creaform VXelements fully integrated 3D data acquisition software, an easy-to-use platform that manages the complete scanning process. By providing a “live” view of the 3D scan on the screen, the engineers could quickly see the 3D scan’s quality and the areas needing more data or had been missed completely. VXelements also provides an immediate high quality and optimized STL triangulated surface, which gave the museum scientists the opportunity not to have to carry out post-processing activities such as cleaning, filtering, best-fit, and surface creation of the point cloud, all of which are extremely time-consuming and labor intensive. 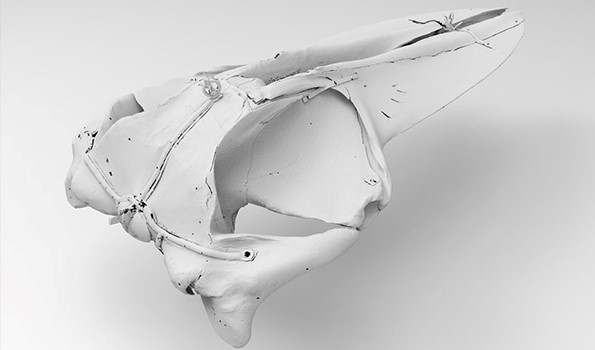 An initial 3D rendered view of the whale skull, measuring around 6 metres in length.

Although the engineers had originally allocated several days to perform the 3D scanning of the blue whale skull, it came as no surprise that the project was completed in less than 2 days. Measurement Solutions provided the museum’s scientists with optimized scan data files. They now have 3D documentation of the skull should anything unforeseen happen to the blue whale during its long life in London. This data will be fundamental in providing the Natural History Museum with a highly accurate digital representation of the skeleton that can be used for 3D visualization and be transferred to other museums around the world for their own research purposes. Of most importance, the data will serve to assist scientists and conservators both now and in the future in their understanding of the development of such large animals.

Hope, the Blue Whale exhibit, is now located in Hintze Hall at the main entrance of the Natural History Museum in London, and is certain to attract just as many visitors as Dippy from all over the world.

Based on original text by Iain Caville, Managing Director at Measurement Solutions