As the host of NBC’s The Tonight Show from 1992-2014, Jay Leno became known for is fascinating obsession with collecting cars. His collection, which is housed inside the “Big Dog Garage” in Burbank, California, contains over a hundred motorcycles and 200+ cars. Since retiring, Leno has been able to indulge in his collection even more, making it a point to drive at least five of his cars a day in order to keep them in a good road condition. He’s compiled a team of top-tier mechanics and engineers to keep every car in his massive collection drivable and in perfect condition. However, cars are cars and even with his team top-notch engineers and mechanics working constantly on every car, parts still break – especially in a collection that includes some vehicles over a hundred years old. Finding replacement parts for vehicles like these in considerably hard and manufacturing them traditionally can become extremely expensive. 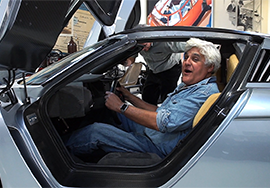 Luckily for Leno and his team, 3D scanning and printing technologies from 3D Systems provided a fast, inexpensive way to produce these parts. By using these technologies, they are able to recreate parts no longer mass produced and even produce fully-custom vehicle parts tailored to Jay’s liking. One of his cars that required to utilization of these 3D technologies is a hand-built concept vehicle known as the EcoJet which was built entirely by Jay’s team. The vehicle, which runs off of biodiesel fuel, features a monstrous 650hp gas turbine engine from Honeywell. This basically means it’s a jet engine inside of a car. Due to this, the car cannot be started within the garage. Jim Hall, Big Dog Garage’s Chief Engineer, explains:

“Because the EcoJet has to be pushed out of the garage and out of trailers at shows, it is easy for people to inadvertently lean on and break the vents that are installed just behind each door on the car…”

Unfortunately for Hall – and the rest of Jay’s team – the original CAD data for the EcoJet was lost when the garage’s servers experienced a series of issues, so they aren’t able to just simply 3D print new replacement parts for damaged/broken components. This is why Hall has introduced 3D scanning technologies to this team’s workflow. Using 3D System’s 3D scanners, software and hardware solutions, along with their 3D inspection tools and 3D printers, the team is able to produce unmatched 3D data for parts and produce them on-site. Using a Faro scanning arm with the solid modeling toolsets within Geomagic Design X software, the scanning process maintains producing extremely accurate and an incredibly fast rate. Design X even features a LiveTransfer function which automatically converts the data into a 3D CAD file.

“Scanning using the Faro arm is close to perfect,” commented Jim. “The blue light scanning is incredibly accurate and can even work on shiny parts – something that has not been easy for 3D scanners in the past.”

“Geomagic Design X is just that – magic! This software makes sense out of the 3D scan data, it’s super fast and it creates 3D models and then transports them into your CAD software as native files. In a matter of 30 minutes we have gone from no CAD data to having feature-based, editable 3D CAD data of the parts.”

A parts composed of Duraform HST Nylon material that was produced in a 3D Systems SLS 3D Printer.

“3D Systems Selective Laser Sintering (SLS) printing delivers very high strength and very light parts using the Duraform HST Nylon material. We don’t want to increase weight on the car so we had to be careful to make the right choice.”

The Duraform HST Nylon material proved to be an exceptional choice for producing their parts. SLS 3D printing systems now provide Jay Leno’s team with some of the highest quality prototypes and end-use parts obtainable. According to Leno, “This is amazing, how we just take 3D scans and come back with end-use parts that fit perfectly. We could never have done this without 3D Systems.”