The CMM or Coordinate Measuring Machine

The CMM, or coordinate measuring machine, has long been the standard for dimensional inspection of complex parts across a variety of industries.  But, has the CMM outlived it’s usefulness?  Is this technology now obsolete in the face of new technologies such as 3D scanning?

The coordinate measuring machine  was first developed in the late 1950’s.  With the advent of the touch trigger probe in the 1970’s, CMM rapidly expanded into American manufacturing companies for use in quality control leading to a revolution in three-dimensional measurement. 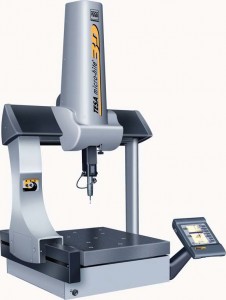 A typical CMM has 3 mutually perpendicular axes:  X, Y & Z which allow for movement of a probe in 3D space.  The machine records data point readings as indicated by a probe tip.  A touch trigger probe allows for automatic capture of the probe location in space whence it makes physical contact with the part being measured.

The coupling of the touch probe with Direct Computer Control (DCC) CMM’s, means that part inspections can be programmed, allowing for automation of inspection of multiple iterations of the same part design.  Add to this the ability to program the CMM based upon the Computer Aided Design (CAD) model of the part, and the entire inspection process can be developed before the first part is ever manufactured.

This concept was revolutionary at the time, and meant that the CMM could very accurately measure a large quantity of manufactured parts very quickly.

The CMM, however, does  have its limitations.  In order to achieve micron level accuracy, the majority of CMM’s are built upon a slab of granite and are locked away within a temperature controlled inspection lab.  They are also limited by their size in respect to the types and sizes of parts that can be inspected.  Large parts require a large CMM.

The programming of DCC CMM’s can also be quite complex, and require a relatively high level operator.  The CMM programmer will need to have a comprehensive understanding of inspection principals, as well as familiarity with 3D CAD, and considerable computer skills.

Finally, CMM’s, in general, collect sparse data sets, meaning they only collect a few points in order to calculate geometric features of a part as designated by their programs.  So, when the inspection is complete, the CMM software can only display those points and features directly measured by the machine, making it very difficult for the average person to visualize the results of the inspection, particularly if the measurement results are not overlaid on to the original CAD design.

When one compares these limitations with 3D scanners, one can immediately see the advantages that scanners hold over traditional coordinate measuring machines in regards to portability,  part size, ease of use,  and visualization of results.

Since the traditional CMM is trapped in the inspection lab, the part must be brought to the CMM.  Not true for most scanners, particularly hand-held systems, which are extremely portable.  The scanner can be brought to the part.  Not only is the scanner able to travel out to the manufacturing floor to assist in troubleshooting tasks, it can also travel to a supplier location, or a customer location.  This flexibility can be extremely useful in solving assembly issues between components fabricated by different suppliers at different locations.  A quick scan of each part can comparison to the original designs can rapidly illustrate which part or parts in the assembly are causing the problem, the location of the problem, and the magnitude of the problem.

Scanners are also have fewer limitations with regards to part size.  Scanners can typically collect complete data sets on parts much larger than what can be captured in a single field of view by aligning successive scanned images together using a variety of different techniques.

One option for aligning multiple scans is the use of optical or photogrammetric targets.  3 or more targets must be common betweens successive scans in order for the scanner control software to identify which scans match up to each other.  Hand-held scanners also employ targets, but utilize them somewhat differently.  The handheld systems dynamically scan the entire part, as opposed to using successive, discreet images.  In this case, the targets are used by the system to establish the position of the scanner in space, relative to the part being scanned. 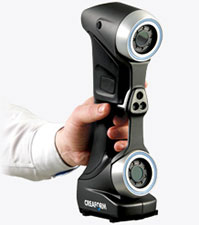 Another method of aligning scans requires the manual picking of points common between data sets, or the manual manipulation of the orientation of any one scan in order to match it to adjacent scans.  Although effective, the manual method can be somewhat time consuming.

Whereas the CMM needs to be programmed in order to measure just about anything, most 3D scanners operate in either a “point and shoot” mode, similar to a digital camera, or in a dynamic scanning mode, similar to a hand held video camera.  In either case, no pre-programming is required to scan a particular part.  The minimal prep time required for scanning as compared to measurement with a CMM means that scanners can be much more flexible as far as their allocation for measurement tasks that arise unexpectedly.

Scanners also capture millions and millions of data points as compared to the CMM which generally only captures discreet points and features.  This copious amount of data produces either a cloud of points or STL file that represents the entire part being scanned.  Although not technically a CAD model, the resultant data set from a 3D scan does create a near perfect 3D model or rendering of the part being scanned allowing for the easy visualization of measurement results.  3D inspection software developed for 3D scanners allow for the creation of a color map which graphically illustrates deviation from nominal when compared to the original CAD.  Input an allowable deviation, and out of tolerance conditions are immediately display such that even the most novice operator can identify problems. 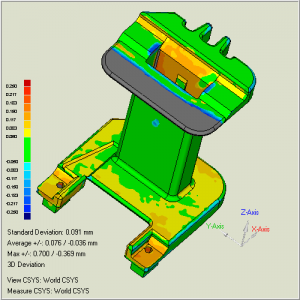 Not only can this type of analysis be performed against the original CAD, it can also be performed using a “golden part”.  There are instances where the original design of a component doesn’t actually work as intended, and it needs to be modified in manufacturing in order to function.  In such cases one can end up with parts that work, and parts that don’t, and no one knows the difference.  A quick scan of each coupled with a 3D color map can quickly identify differences.  This data can then be fed back to engineering to update the original design to match what works in manufacturing.

Whereas all these attributes do prove that 3D scanners are useful tools for dimensional inspection, they too have some limitations.  Since all scanning technologies discussed herein are optical, they all suffer from line of sight issues.  So, if you can’t see a feature, you can’t scan it.  Surface finish or reflectivity can also inhibit scanner performance.  Some parts may require dusting or coating with a matte white spray in order to facilitate scanning.  Finally scanners are not suitable for every type of part geometry.  Very geometric or prismatic parts can generally be measured more easily by hand, or with a coordinate measuring machine.  Scanners are better utilized for those very complex shapes that cannot be measured using traditional methods.  Finally, most 3D scanners do not achieve the same degree of accuracy as the traditional CMM, so they may not be the most appropriate inspection tool for very tight tolerance applications.

So, although 3D scanners offer a variety of benefits for several applications for dimensional inspection, they are not necessarily a replacement for the Coordinate Measuring Machine in every instance.  Where one tool has strengths, the other has weaknesses.  Scanners and CMM’s should be considered complimentary tools in toolbox of the inspector.

Dan Perreault is the President & Founder of NeoMetrix Technologies, Inc. based in Lake Mary, Florida.  NeoMetrix has been in business since 2003, and specializes in 3D scanning for reverse engineering and inspection as well as 3D printing for rapid prototyping.  Dan holds a bachelor of science degree in Aeronautical Engineering from Embry-Riddle University, and has over 25 years of professional engineering experience, having worked at ECC International, Lockheed-Martin, FARO Technologies, and Direct Dimensions.