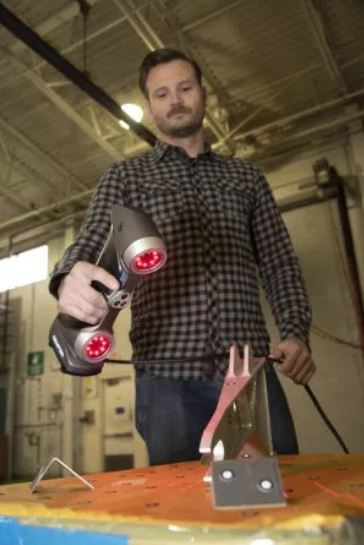 “At Travis (AFB), Airmen are empowered to identify and solve problems at their level, rapidly, we want Airmen to think big and try the ideas others say will never work. It does not always have to be proven technology or have a business case. Let’s just try it, who knows it may just work.”

Since the Air Force desired increase in readiness, cost reduction and enhance lethality of the force there were $64 million distributed in funding. In October, Travis AFB obtained a Creaform HandyScan 700 3D hand scanner which is capable of producing three-dimensional representations of aircraft parts. This same device is also helpful in finding and inspecting aircraft damage.

“ The scanner displays the deepest part of a dent to the nearest thousandth of an inch, the scanner can identify the shape of a dent, as well as if it’s sharp, smooth or round, which allows us to give our engineers a better damage analysis than we could before.”

Smithling said the scanner was first used in November to inspect the landing gear of a C-17 Globemaster III after a bird strike, and over the past month, has greatly reduced the time required to complete damage inspections.

“One of our C-5 aircraft went through a hail storm in 2013 and we found many dents on all the panels,” he said. “We’ve performed an inspection of this aircraft every 180 days and we’ve had to measure every dent that’s still on the wing’s surface. The first few times we did that, it took us 48 hours. We had that C-5 in our hangar last week and we were able to inspect the four primary structural panels in 30 minutes.”

The 60th MXS is also in the process of procuring two 3D printers, one polymer printer and one metal printer, so they can reproduce aircraft parts. Smithling also states.