How important is 3d Scanning to National Security

Millions of people are passing through airport facilities every year whether headed on vacation or a business trip. In the early years of airport security the checks included baggage being x-rayed, opened, rummaged through, and then repacked in order for that bag to be allowed on to its next destination. With more families traveling, the baggage checking process clearly needed an upgrade.

Security has discovered that a high performing 3d scanner improves and speeds up the process.  The way this works is that the bags are scanned, which enables the workers to view the baggage from many different angles. This process also allows airport security staff to obtain a clearer picture of the bags contents at a faster rate and provides a more effective outcome than previous methods.

Many International and Domestic airports around the world already implement the use of 3d body scanners at check-in points. It might be assumed that the successful use of the body scanning devices would encourage all airports to put in place plans of a universal 3d baggage scanning system to help aide security. However, this has yet to happen. 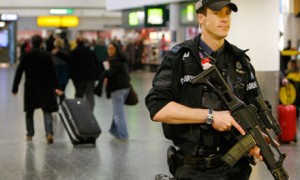 Of course, the main issue surrounding why it is has not officially happened is the financial cost of implementing this technology. One would think that meeting the cost of this technology would be enough of an investment to bring this type of security to the airports, which would reduce the current expense of using the older methods set in place now.

This decision leaves an open-ended question of, “Just how important is the safety of the million passengers commuting at any given airport each day?” Tighter security measures are needed more these days than ever before, especially in the light of regular terrorist activity. It is only a matter of time until this type of technology is seen at every major airport.