How Did Markforged Helped A PhD Candidate Compete In BattleBots

Contender Jamison Go, PhD is a candidate at MIT who entered the antweight fighting division at the TV show BattleBots. Jamison Go was looking to improve the weigth and strength of robot designs by making a unibody and 3D printer chasis.

It is recommended that designers should they want their robots to have any chance of winning, they have to make sure their robots are sturdy and strong enough to take a lot of hard hits, while being powerful and light so the robots can strike fast and hard.  The contestants range from toughened veterrans who know their way to fresh face eager to gain experience and test their skills in battle.

Jamison Go is one of the many designers that entered this competition, he is an MIT PhD candidate researching 3D printing technologies. Entering the antweight division, Jamison was aware than his entire assembly had to weight less than a pound. Jamison ‘s robot was the DDT which is a robot that was laden with a bulky, cumbersome frame, lots of fasteners, stacked plates, and plastic components. Plastic components were very flexible which was not good for the design.

Upon encountering the Markforged Printer, Jamison saw an opportunity to modify the chassis of his DDT and make it a single light weight part.  Jamison states:

“This printer is unique because it has the ability to embed continuous strands of fiber within each layer of its print. Although it cannot place fiber in the vertical build axis, this is a monumental improvement in tensile strength… it prints nylon as its base material, which is mechanically superior to ABS in our application.”

Jamison had to began his design all over again, he first started by modifying the chasis using CAD. CAD  became an invaluable tool in this process. Each part was re-design to make sure it was suitable to Jamison and the competition’s needs. Jamison was able to get rid of bolts and screws that added unnecessary weight. and was able to print his new chasis in 52 hours with a small cost of $54.70 (material). If Jamison had machined this it would have costed him about $1.090.41 with a time delay of 3-5 days plus shipping time. In the end Jamison was able to decrease frame weight by 49 and became the #2 ranked combat robot of its weight class world wide. 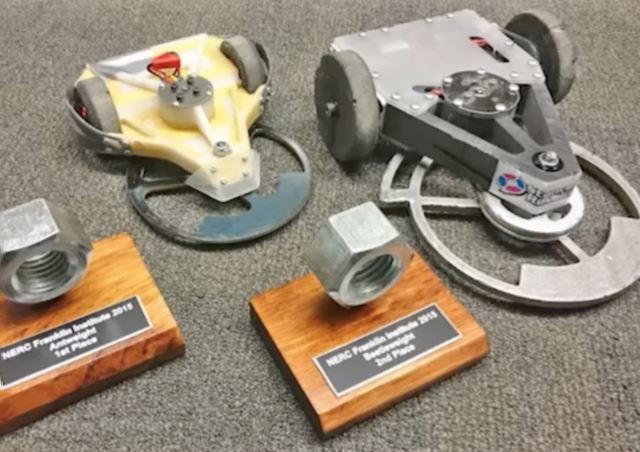 If you have any questions regarding what a Markforged 3D printer can do, feel free to contact us, let one of our engineers explain and help you decide what is the best route for your project. NeoMetrix also 3D prints in metal. For more information click below

Want to Learn More About Markforged?