Healthcare and Education Flourish with the Help of 3D Print Technology

Three-dimensional printing has been responsible for concept prototypes to cut costs of products for many different companies. Auto manufacturer’s like Lamborghini use rapid prototyping to modify and save on costs during the creation process of their high-end automobiles.

It’s fair to say, laser scanning and 3D print technology are appreciated more and in more demand than previously. Part of the reason this technology has moved to the front of the line, in terms of popularity, is due to its advancements. In addition to, the increased number of applications that can be used with it.

With 3D printers and the products  associated with it at a more affordable price range, it has meant that more of us can now purchase it. The ways individuals and industries are using it today are too many to count; however, let’s look at some of the best examples of its use. 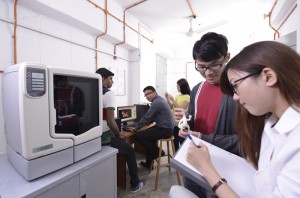 The world of medical science is gaining the most out of implementing 3D printing. The equipment is at the center of pioneering surgeries, and responsible for helping rebuild the lives of mine victims, crash victims, babies with breathing difficulties, and has played a role in prosthetic limbs for animals.

Education is flourishing with the help of 3D printing.  Class projects are more hands on and encouraging pupil involvement.  Older methods of teaching involved textbook drawings and poorly drawn diagrams on the class teaching board.

Imagine now the impact of concentration levels, as teachers present their pupils with a fully detailed plastic 3D printed model of the human heart. Many schools are introducing 3D printing directly into curriculum, alongside traditional methods of teaching to improve education in schools, colleges, and universities.

Keep in touch, and find us on Google+