The technology of 3D printing is incredibly versatile and there are multiple applications in which it can be used every single day. From corporate giants and world brands to the sole individual for personal use, 3D printers and 3D printing technology has benefited them all. Today, we are going to look at 3D printers in a unique and inventive way. We will look at how 3D printing is being explored in the creation of food and how it could improve the way that we prepare and make food and more importantly, in the future to come.

When it comes to creating and developing the food rations that the armed forces will eat during their months of combat, there needs to be some serious consideration about what the troops will be fed. There are specific requirements that need to be adhered to and those are that the foods created must be non-perishable. They also need to be lightweight and easy to pack away, plus be nutritious. For many years, food scientists have been trying to make improvements, while trying to have all these important qualities in ready-to-eat meals. This has been a challenge but there is good news on the horizon for those in our armed services! Higher quality, better tasting food is on the way.

Thanks to the likes of ChefJet who are able to use a 3D printer to create and print off edible food. Another company is MakerBot who has created and used 3D printers that are able to create and print anything from product parts and human hearts. This has made the researchers at the US army take note of this technology and look into ways that it can be implemented and used in new ways to create food for the Armed Forces. The recent advancements in 3D printing technology has meant that there is now a strong and reliable link between 3D printing with food production and creation.

Three-dimensional printing is now so advanced that it is seriously being explored by scientists to see what benefits and food options can be added to the present menu that is available to those who require MREs. With the Army having already being able to take advantage of such things like 3D printed pizza, as in the slice in the picture below. Surely, 3D printing can offer an extensive higher quality source of food groups with the technology that is available to use. The full benefits of using 3D printing to create food has yet to be seen but so far the outlook has positive attributes. 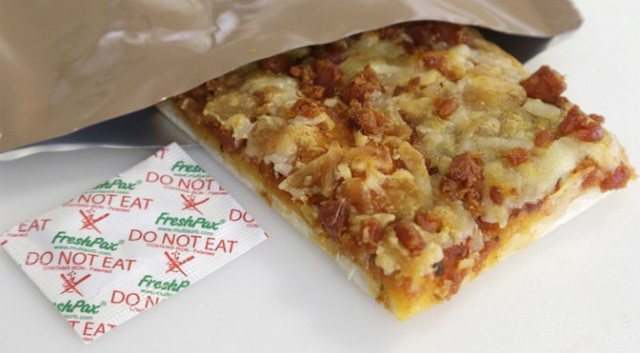 As you can imagine, this pioneering research by the Army is still in its early stages, as the researchers themselves get to grips with the actual technology that is involved with 3D printers and creating food. The Army, at the moment, is still focusing on continuing to make the smaller compact foods that they are used to making until they fully understand the benefits of using 3D printed food and evaluate its make up before sending it to the front line. This makes the most sense as at least those serving their countries will still be able to get food by using the current methods in which it is still being created until 3D printers can be fully relied upon. What they will be looking to do is create stable foods, like pasta, in the near future that can provide the nutrients that the body craves.

The thought of eating 3D printed food will take a while to catch on. However, as mentioned above, there are several companies who are exploring the area of 3D printed food and its possibilities. There have already been successful attempts at creating edible 3D printed candy and a wide variety of desserts. It is in these areas that 3D printing has already taken off. 3D printing technology is advancing each day as it is improving and bettering itself. If this is the case, then we could be seeing 3d printed food much sooner than we think and in places we would never have even thought about.

What is great about Sky Kitchen is that they are trying to develop software that would allow passengers to browse and select the food that they desire through an LCD screen. Typically, this would be the same screen that they would watch their in-flight movie on the back of the head rest of the chair in front. The LCD screens will give the passenger the option to select what foods are available from the menu and decide on what toppings they may want on any dessert dishes.

This radical proposal to try to improve in-flight meals will come as a breath of fresh air for perhaps pregnant women, passengers with diabetes and also high blood pressure issues may also be relived. With the possible ability for passengers to select their own meal, specific to their own tastes, it hands the options to the passenger who does not have to have the pre-selected meal that was already in place.

The possible introduction of Sky Kitchen would also cut back on waste costs in terms of unwanted meals. With Sky Kitchen, food is made to order and only fresh ingredients will be used. It seems that long haul flights may just be getting a little more bearable, well, meal times anyway.

One idea that has made the headlines is that of Sky Kitchen. The idea that Sky Kitchen has is that they are trying to bring their ideas and concepts of creating food, using 3D printers, onto the world airlines. Now this idea may sound quite far-fetched, but it could be made possible due to the high levels of technology that are connected to 3D printing. The group of people behind Sky Kitchen is looking at providing a more extensive range of food options and a more detailed menu to choose from when it comes to airline passengers choosing their meals.

With most people having travelled by air at some point in their life, there will be one thing we can all agree on and that is having at least one tasteless in-flight meal. Using 3d printers could have a positive effect as the food prepared would be fresh and made from fresh ingredients. It will be interesting times ahead to see if the 3D printer is able to create high-quality, edible food that can be used on our major world airlines to improve the current standards of food quality.

We touched on 3D printed candy earlier in this article so let’s take a look at how it is created and the more important factor of how it tastes.

One company called The Sugarlab has create a 3D printer called the Chef Jet which can create and print off sweet tasting candy in different shapes and images. The colors and designs of this 3D printed are remarkable and highly detailed. The sweet tasting candy comes in shapes which include interlocking cubes and colorful globes. Check them out below. 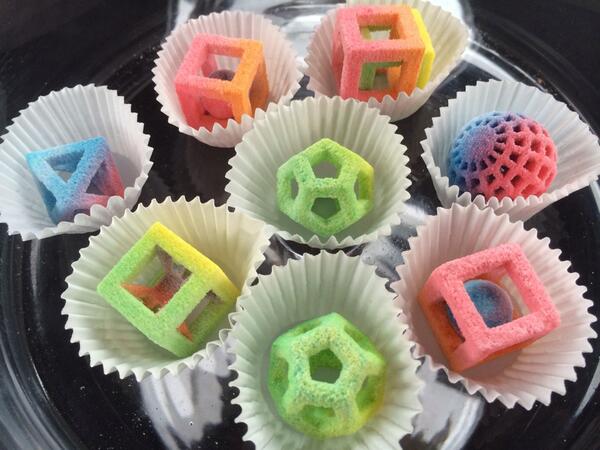 What we have to understand is just how far 3D printing technology has come since its introduction to us as stereolithography, by Chuck Hull, many years ago. From where 3D printing is today, and in terms of its advancements, 3D printer founder Chuck Hull must have known the potential behind this cutting-edge technology.

Now, as we already know, there has been much talk recently of the use of 3D printers in helping create food items. In the future, we will more than likely be able to look up our favorite dishes on our computer screens before punching in our specific requirements for the 3D printer in our homes, to create and print off our meal of choice.

There are multiple uses for the 3D printer and the technology is certainly a hot topic in 2014.  From 3D printed body parts to 3D printed cars it seems that this technology has made tracts in all these and many more industries. With more businesses spending the time and their cash and investing in this technology to implement in their own business module, it looks like 3D printing is only getting more popular.

Three dimensional printers are now affordable to the masses, meaning that more and more people are able to afford them and come to grips with how they work and more importantly how they can benefit from using them.

With 3D printers, it is only the imagination of its user that seems to be the stumbling block when it comes to creating or using them. 3D printing has entered the main stream and is now a technological force to be reckoned with. The time is coming near when the 3D printer will be as relevant and useful in the home as the common microwave or kettle. In the future, 3d printers will be used on a daily basis, not only for business but also commercial and personal use.

It is decision time for society to embrace 3D printing technology as their own and push and use it to its full potential OR does society sit back in fear of a technology that they dare to even understand? 3D printing is beautiful! It is alive and thriving well. 3D printing is relevant now and future generations. It will be the accelerant that will push technology and society to the next level in terms of advancement.

One thing that can be agreed on is that the future will never be dull or lack excitement when it comes to 3D printing. What used to be deemed far-fetched and expected to be found in a science-fiction movie is now a reality. 3D printed organs are becoming a reality; lives are being saved and are already being changed for the better. It’s time to go with the flow and get on board with what’s happening in our world and in the world of 3D printing. Let’s take the time out to explore 3D printing and its relevance now and for us on a personal level for the future.