In the past, famous artists would have to painstakingly use their skills, raw talent, and time to perfect their creations before they could show the world it’s completed state of beauty. It’s not unusual for artists to use a variety of materials combined with their skills to sculpt and paint in order to bring their mind’s idea into life. 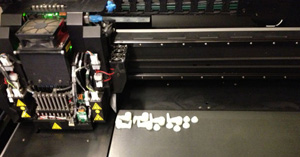 Unfortunately, 40 years ago, the famous Dutch Graphic artist M.C.Escher passed away, but that hasn’t stopped others from looking to him for inspiration and continue to be captivated by his imaginative designs and drawings.

One of his more memorable concepts was his “mathematical bent” this was considered impossible geometry at the time, and was a hallmark of his forward-thinking and design concepts–making the impossible look possible.

Rachel McConnel, a fan of M.C. Escher, works and explores art & design and engineering as part of her job. She turned to 3D printing in an attempt to bring one of M.C. Escher’s concepts to life.

By using a 3D printer she was able to create a physical solid object from information she obtained while studying the Dutch artist. An Objet500 Connex Multi-Material 3D Printer was the equipment Rachel used to complete the project.

The object created was based on the 1951 Escher print called the Wentelteefie (you can view the original artwork here). The Wentelteefie was a fictional creature its appearance was like a lizard with various articulated segments, it was composed of legs like a human, eyes that were on stalks, and a bird-like beak. 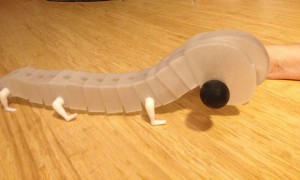 The creation is very unique indeed and is nothing like what has been seen before. The beauty in this creation is that an artist, who lies in a grave, has had his creation brought to life 40 years later by someone who studied his work.

Rachel used 3D printing to make a fictional character of the mind become a true-to-life physical form. If M.C. Escher could speak right now, even he would say that this was cool. 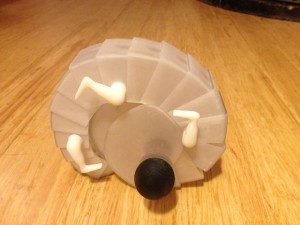