Dispelling a Myth: 3D Printing is not Science Fiction

All Starship fans will recollect Captain Picard ordering his favorite beverage using his voice to activate the replicator on board his ship. Science Fiction fans might find it easier to embrace the concept of three-dimensional printing and can forgive those who think 3d printing sounds like something from the future. This technology is real offering advanced abilities giving the user a chance to create anything they imagine. Nothing is out of reach; things like human organs have already been successfully re-created by following simple computer instructions.

3d printing is not a thing of the future; it has officially arrived on the scene, and is creating a buzz in many different industries. The Printing technology uses data captured during laser scanning, and allows the user to amend, or upgrade any object of their desire. The user can then design what the scanner captured; this could be anything from, toys, running shoes, jewellery, and prosthetic limbs. The most frightening creation so far is a fully functioning 3d printed gun the liberator (watch video), this has the authorities in a stir about setting new guidelines and stricter gun laws.

Inventor Charles Hull, who successfully discovered a way in 1983, (stereolithograhpy), where objects could be successfully built layer-by-layer, and was the first to use the process of printing solids. This find was a breakthrough and embraced by many companies in need for rapid prototyping services.

Businesses and industry have benefitted in a number of ways, including saving their time and money compared to using older time-consuming methods. Instead of having to outsource the work to get projects completed in a timely manner, the technology was brought in-house.

As far as popularity is concerned for 3d printers, the awareness and excitement is skyrocketing. Watch prices lower and watch how easy it is to use, people will be buying them for their homes soon. The truth is, this technology has helped shape most of the consumer products on the market, it is not matching it possible for consumers to create the products on their own instead of waiting on it to be manufactured. 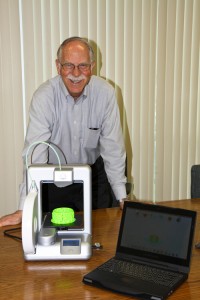