NASA’s Systems Intergration Evaluation Remote Research Aircraft (SIERRA) Unmanned Aerial Vehicle (UAV) is an innovative unmanned aircraft which is used to collect earth science data across the globe. The SIERRA has been an extremely effective tool as NASA has been able to frequently deploy it on environmental collections missions across remote, inaccessible locations with harsh conditions such as the Artic where it has been sent to collect data on the polar ice coverage, or over active volcanoes. NASA recently set out to improve plane’s hangtime that was 9-10 hours, as they hoped to increase to enable them conduct longer missions in which more data could be collected. NASA’s solution to achieving this was to completely redesign the engine cowling in order to reduce the drag which would, in turn, improve the fuel usage.

The U.S. Naval Research Laboratory developed the aircraft in Moffett Field, California at NASA’s Ames Research Center and used an off the shelf aircraft engine, meaning NASA didn’t own a model for reproduction. Fortunately for them, by integrating a 3D laser scanner and Geomagic Design X 3D scan to CAD software into the design process, they were able to cut the process by around 90% while also correcting some flaws. NASA estimated that if they had elected to use traditional measurement methods, the process would have required at least 500 hours of work from their engineering team. By using these 3D technologies and bring in a 3D Systems’ re-seller for help, however, they were able to obtain a highly accurate CAD model in just around 50 hours. 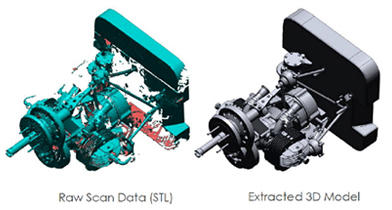 “Using a 3D laser scanner and software, we can reverse engineer equipment in a fraction of the time it takes to manually accomplish this task,” explained Bobby Machinski, owner of MACH-T3 Engineering, the licensed re-seller of 3D Systems’ products that was hired. “Today’s innovative 3D technology allows us to easily obtain all of the proper contours and quickly produce a CAD model for any part.”

One of the most beneficial elements of Design X is the ability to develop a model from incomplete scanned data. This was a pivotal feature when deciding which software application would be best fit for this project because optical 3D scanners often can’t pick up all the data points to render a complete 3D scan on objects of complex design.

“The beauty of Design X is that once you get enough information, you don’t need a hundred percent of the data,” explained Machinski. “Design X recognizes the geometry and allows you to extract model information, even with missing scan data. The software finds the geometric primitives automatically. This capability makes it easy to convert the data over to a CAD solid model, saving time and improving accuracy.”

Another element of Design X that was greatly utilized throughout the design process was the deviation analysis. This was used in order to determine just how much the raw scanned data and CAD model deviated from each other.

“This feature allows us to set tolerances as needed. We can step it up or down to find out how close we are to the ideal model versus the physical model,” Machinski continued. “The software allows us to quickly address deviations that matter to the design, ignore the ones that don’t, and produce a solid model quickly.”

Thanks to the help of 3D scanning and Design X software, NASA is now much closer to achieving their goal of redesigns the SIERRA’s cowling. The 3D CAD engine geometry has aided them greatly as they work to complete recreate the cowling design in a more aerodynamic fashion.

“The entire project took us 50 hours instead of 500, allowing us to achieve success in only 10% of the time it would have taken us compared to using conventional means,” concluded Machinski. “NASA was ecstatic when we completed the project so quickly. The model of the engine was complete, accurate, and allowed them to make an improved cowling design that perfectly fit around all the engine components of the SIERRA.”