The MetraSCAN 3D scanners are the most accurate scanning solutions on the market, whether in lab or on the shop floor. Like Creaform’s entire portfolio of measuring technologies,  The MetraSCAN 3D are easy to master and use, and they take only a few minutes to set up.

The combination of The MetraSCAN 3D CMM scanner and a HandyPROBE arm-free CMM makes for a complete and powerful measurement system for points and surfaces, and enable geometrical and freeform inspection on the same part, with the same system.

The MetraSCAN 3D 70 offers optimal resolution. It is ideal for projects where geometrical feature definition is key, such as sheet metal and tooling inspection. 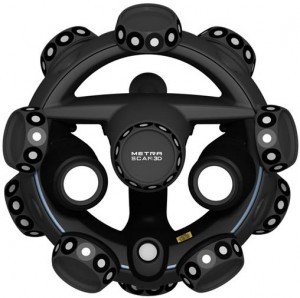 The MetraSCAN 3D 210 offers increased measurement speed. Its increased stand-off and depth of field make for enhanced scanning flexibility. It is ideal for large surface metrology and large-scale reverse engineering.

• Both 3D scanners feature the same accuracy and they have been fitted with a new light carbon structure.

We believe that this expanded and enhanced The MetraSCAN 3D line-up fits the needs of our customers now more closely when it comes to quality control or reverse engineering applications, said Jean-François Larue, product director. What’s more, we integrated the know-how acquired on the technology since the launch of the first generation of MetraSCAN in 2010. Among all the inspection systems available on the market, the MetraSCAN 3D scanners remain best at increasing the reliability, speed and versatility of the measurement process.
The new devices will be presented to the public for the first time during the CONTROL tradeshow in Stuttgart, Germany, from May 8 to 11 (hall 5, booth 5108).