World-known sportswear company, New Balance, has broken manufacturing barriers with the successful production of the first ever 3D printed midsole for the high performance running shoe – the Zante Generate. Only 44 pairs of the shoes were produced in honor of New Balance  chairman Jim Davis’ 44 years of company ownership. 3D Systems’ Selective Laser Sintering (SLS) 3D printing systems were used to create this revolutionary soles using their DuraForm Flex TPU materials. In addition to the use of the SLS 3D printers from 3D Systems, the ColorJet 3D Printing (CJP) systems were all used to provide color and form prototyping. New Balance has been using 3D Systems ColorJet 3D printers to develop prototypes for more than 15 years now.

“The prototypes show designers what the midsole will look like in real life,” says Daniel Dempsey, Rapid Prototyping and Manufacturing Engineer for New Balance. “Looks can be very deceptive in a CAD model, but a CJP prototype is as close as you can get to the appearance of the real thing.” 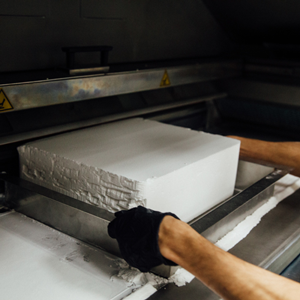 According to Dempsey, the main asset of using 3D Systems CJP systems is that the enable users to create models in full-color quickly for a very affordable price. Throughout a year, these 3D printers allow them to make hundreds of additional tweaks and alternations to their designs. Prior to the use of ColorJets, New Balance – and other shoe makers – would create wooden models or aluminum molds for manufacturing a prototype for particular designs. These models would take multiple weeks to produce and required people to paint them by hand.

“The ability to print something, look at it and hold it in your hands the same day versus weeks to get a model created has sped up our product development cycle tremendously,” says Dempsey.

The incredible speed, accuracy and cost efficiency of ColorJet 3D printers sparked a cultural change at New Balance, providing designers the freedom to experiment with the prototypes without the consequences of high costs and lengthy production times.

“Our designers are always trying something different and new that no one else has done before,” says New Balance CJP Technician Ed Rodriguez. “The CJPs allow us to try anything we like without having to worry about getting it right the first time.”
Rodriguez estimates that New Balance will prototype 1,000 models this year on the CJP printers and probably increase that number to 1,300 next year. “If we get a print request early in the morning,” says Rodriguez, “we can have a print ready in the early afternoon for a designer to review, after which design changes can be made and another print produced before the end of the day. We’re running the ProJet x60s every week and sometimes on weekends when we get busy.”

The SLS 3D printers from 3D Systems provide the perfect complement to the ColorJet 3D Printing Systems, allowing them to produce prototypes in DuraForm Flex TPU material. This material provides them a prototype with the exact properties as the foam used in the actual retail shoes, essentially giving New Balance the capability of testing the performance and durability of their designs before making the decision to manufacture the product or not.

“Elastomers such as DuraForm Flex TPU weren’t available five or six years ago,” says Dempsey. “We can now prototype in structures that mimic the look and feel of foam.”

When creating the Zante Generate, the SLS 3D Printers were used not just to prototype the shoes, but also to manufacture the actual midsoles for the shoes. Because New Balance’s design featured such complex organic geometry in the midsoles, traditional molding processes in manufacturing would have been unable to attain the desired results. 3D Systems SLS 3D printing systems provided them with this capability because the Duraform Flex TPU material, layer after layer, in the exact proportions required to provide optimum support with minimal material waste.

According to New Balance, the midsoles for the Zante Generate “leverage the benefits of 3D printing and breakthroughs in available materials to achieve an optimal balance of flexibility, strength, weight and durability in an intricate honeycomb midsole structure.”

Constant developments in 3D Systems ColorJet and SLS 3D printing systems have allowed New Balance deliver on data-driven initiative that Dempsey help distinguish them in an extremely competitive industry. The company is not just designing around static form, fit and aesthetics, but basing its products on individualized motion data collected in the sports lab of its Lawrence facility.

“We can vary our designs to match your biomechanical data exactly, to the point where design features for your left shoe are different from your right,” says Dempsey.

New Balance intends to utilize 3D printing even more in the future as they hope to customize other shoes with the technology. Dempsey is confident that within the next few year, a new era will begin – individualized, direct-to-market 3D printing products that provide form, fit and function based on unique individual biomechanics of each consumer.