3d Scanning and its Varied Applications

The police force in the UK has accepted and is applauding the use of 3d laser scanning technology for its help. Vital details are being captured at scenes of accidents allowing them to clear up the scene at a speedy rate and return things back to normal.

This laser scanning technology is saving lots of time by capturing a 3d image of the scene, so that detectives can review and evaluate the details of the scene via computer aided software. It helps save time compared to the older methods of photos taken at the scene from every angle, they would have to take hours collecting data and vital evidence, but that is not the case now.

After a 3 million pound investment, clearly the law enforcement is dedicated to help the traffic get back to normal flow and eliminate any unnecessary road rage that could be the cause of another accident. 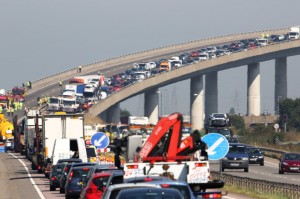 Road and traffic accidents cost a staggering £1 billion a year to the UK economy, the reason for this is commuters and freight Lorries are caught up in bumper-to-bumper traffic, work is delayed, and sometimes even missed due to traffic accidents.

If someone loses their life at the scene of an accident that site becomes a crime scene, officers must take the time to collect all the vital details from that scene, which includes, road condition, skid marks, vehicle distance, and any debris as a result or cause of the accident.

A laser scanner is mounted onto a tripod and takes a 360° virtual image of the scene. All the minute details and evidence is captured sent to be analysed at the crime lab by specialists later.

This is just one example of how 3D laser scanning and its services are being employed to improve standards of efficiency within the UK police department, as well as, fight against crime and wrongdoing.