PowerUp Kayak was founded by Mark Schmidtke following a problematic kayaking experience on the Intercoastal Waterway in South Carolina. Mark set out on what he thought would be a nice, laid-back hour-long kayak trip around the waterway. Unfortunately for him, the weather quickly turned on him and forced him to paddle upstream, constantly, for almost five hours. When he finally made it back, he loaded up his kayak and contemplated how to find a solution to the troubles of kayaking upstream. He came up with the idea of attaching a trolling motor to his kayak upon discussing the issue with a close friend and the story of PowerUp Kayak began. 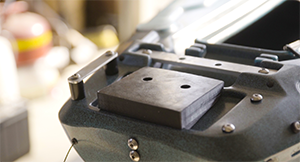 A close-up of the 3D Printed Kayak Shim

He began experimenting with various ways to attach a trolling motor to his kayak. The biggest problem was not mounting the motor, but finding a way to place the electrical systems, rudder controls and batteries on the kayak. He drafted a very functional design that even led to commercialization considerations, however, creating a universally fitting mounting systems posed some major challenges.

“Most kayaks don’t have level platforms you can mount to,” said Mark. “I had used 3D scanning in my dental practice… and it occurred to me that the same technology might provide a solution to this problem.”

After some detailed research on a variety of 3D technologies, he elected to buy a Geomagic Sense 3D scanner, Geomagic Design X CAD software, and a 3D Systems 3D Printer.

“I work out of my garage, my kitchen and my front room,” said Mark. “I needed tools but didn’t need them to take up much space. These products from 3D Systems are a perfect fit and were quite inexpensive.”

Schmidtke was able to scan the back of the kayak, using the Geomagic Sense 3D Scanner, in just around 5 minutes. The Geomagic Sense software automatically saves the scan data into 4 different 3D file types which makes the downstream much simpler for users. Mark elected to save the 3D scan data in .STL format which he was easily able to import into Geomagic Design X software where he was able to create a custom shim, save it into .STL format and send it to his 3D Systems 3D printer.

“I had already created the main plate for the motor attachment in Geomagic Design [X], so it was easy to bring the scan data in, Boolean it out of a matching block, and then create a custom shim that would allow the plate to attach to the kayak,” said Mark. “The scan takes 5 minutes. The shim design takes about another 10, and then it’s 9 hours to print, so in less than a day I have a strong, fully-functional custom shim to use in my work.” 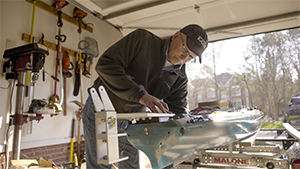 Mark Schmidtke mounts one of his 3D Printed Kayak Shims

The U.S. Patent and Trademark Office recently granted Mark a Notice of Allowance for these designs, and they will all soon be published. Hence, Mark started PowerUp Kayaking and has already began to fit his design onto multiple customers’ kayaks.

“Every kayak is different, and attaching the mounting plate for the motor often requires a custom fitting,” he said.  “Having the option to scan, design and print in nylon, quickly and inexpensively, allows me to mount my system to any kayak…a prerequisite to growing my business. “You don’t have to use the trolling motor every time you kayak,” said Mark. “But you now have that option especially when going upstream, against a tide, or into a headwind. I couldn’t have achieved this without 3D Systems technology. The integrated workflow of the Sense scanner, Geomagic software and the CubePro (3D Printer) totally makes my work easy and straightforward.”