When a child is born, the parents’ instincts kick in and automatically check and ensure that the infant is in good health. When Manuel Dela Cruz’s son, Gabriel, was born he appeared normal after the birth. However, once Manuel and his wife took their son home, they began to notice that Gabriel’s forehead started to look misshapen.

Manuel observed that his son’s eyes were no longer in line with one another. Gabriel’s forehead looked as though the right side jutted out further than the left side. As you can imagine, the parents were distraught and sought professional medical advice straight away.

Gabriel’s parents decided it was in his best interests to get him checked out by a local pediatrician. The parent’s fears became real when their newborn was diagnosed with unilateral coronal syostosis, which is more commonly known as plagiocephaly.

“Young infants’ born with this condition are affected by the growth plate in their head fusing prematurely to one side of their skull, this causes the forehead to protrude and become distorted and not line up asymmetrically.”*

Not wanting the deformity to become worse that made the decision for their son to undergo corrective surgery. In a race against time, the surgeons and physicians at Stony Brook University turned to a completely new method to prepare for the surgery. They worked with Medical Modeling, Inc., in Golden, CO as the specialists assisted them by planning the operation first through virtual means. 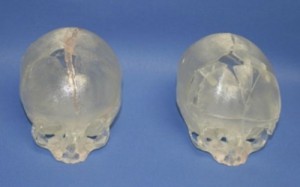 A CT scan of Gabriel’s skull was taken using scanning technology and from the scans they were able to create a number of 3D printed skull models. The models showed the skull before the operation, and how it would look after surgery.

The surgeons cut across the top of the forehead, exposing the frontal skull and eye sockets. Some of the bone was cut away, and reshaped giving the forehead a more natural look.

Gabriel will need to wear a helmet, for the time being, so his skull can grow into the correct shape. The child’s father has said that his son is progressing normally and there has not been side effects because of the surgery.

The power of a 3D medical printing is unmatched by other technologies within the medical health field; saving and improving lives every day is a new reality.