Mystic Aquarium, located in Mystic, Connecticut, serves as home to a group of endangered African Penguins. Following a fight between some of the penguins, the aquarium’s veterinary staff found that one penguin in particular had been seriously wounded and the flexor tendon in her ankle was no longer functional. A penguin’s flexor tendon functions very similarly to the Achilles’ heel of a person, so damaging it was causing the penguin great pain and reducing the foot’s motion.

Once the veterinary staff had identified the penguin, who’s name is Purps, they set out to create a boot that would immobilize and protect the injured foot, while also providing support. Traditionally, they would have had to handmake a custom support for the penguin which would involve some rigorous trial and error in order to produce a suitable boot for Purps. Luckily for the team, and Purps, Mystic Aquarium’s Chief Clinical Veterinarian, Dr. Jen Flower, suggested that they use 3D printing technology to create a custom-tailored boot for Ms. Purps. 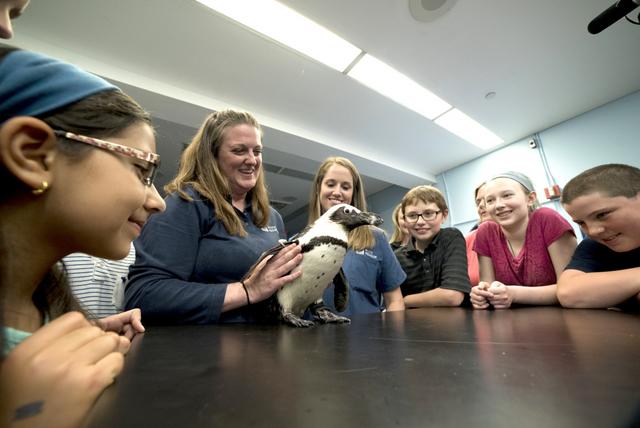 Dr. Flower and a group of students admire Purps the Penguin at Mystic Middle School.

Flower and her team from the aquarium decided to take this idea over to the local public school, Mystic Middle School, where they had recently acquired a 3D Systems’ ProJet MJP 5600 Printer. Working in collaboration with 3D Systems partner ACT Group, and the middle school, the Mystic Aquarium team developed a plan to design and 3D print a new, custom-tailored boot for Purps.

The process began by taking 3D scans of the current boot that Purps had on her foot. After competing the scanning process, they then imported the 3D scan data into Geomagic software where they were able to customize the file by adding treads, hinges and closures that improved the boot’s comfortability and functionality. According to Nick Gondek, Director of Additive Manufacturing and Applications Engineer at ACT Group, the local 3D Systems partner:

“The students amazed us in how quickly they picked up the software. It was rewarding to provide them with a technology that could keep up with their ingenuity, and to watch their creative thinking, imagination and intuitiveness lead this process.” 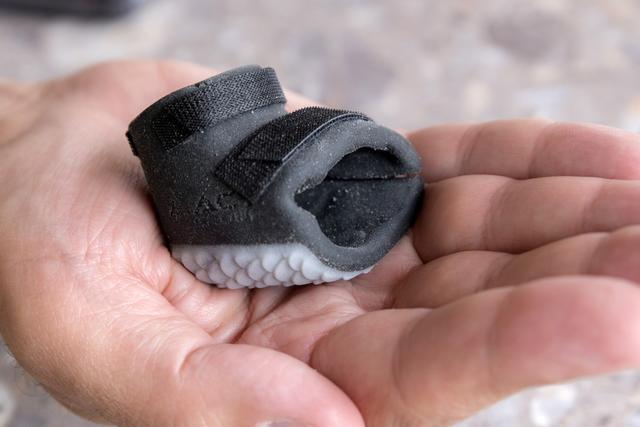 Once they had completed the design process, they simply sent to file over to the the multi-material ProJet MJP 5600 3D Printer that Mystic Middle School has purchased. Because the ProJet MJP 5600 has the ability to produce objects in both flexible and rigid materials, or blend materials, it was the ideal system to choose. The final result was a durable, lightweight, custom-fit boot that allowed Purps to walk normally and even swim.