Sand casting is a frequent used casting process with a lengthy historical record. Also, thanks to additive manufacturing this type of mold casting is being reinvented. The sand molds can be 3D printed, this process allows castings to be geometrically complex. The publication “Economies of Complexity of 3D Printed Sand Molds for Casting” explains how a group of researchers outline the benefits of applying additive manufacturing in sand casting. Some of these benefits are:

In the publication, the researchers describe a method used that scores CAD models to determine the best affordable casting approach based on slicing and 2D geometry evaluation. The three potential outcomes include traditional sand casting; AM-enabled sand casting and a hybrid of the two with 3D printed cores in casting flasks.

“Four algorithms were developed that all began by slicing each of the benchmark STL files and performing analysis per layer producing an average complexity across all layers,” the researchers explain. “This process was repeated for three orientations of each part and the results were averaged including: an unrotated case, a rotated case 90 degrees in X axis and rotated 90 degrees in Y axis. The rotations were completed in order to detect a complexity bias relative to orientation. For each orientation, the complexity numbers from all layers were individually calculated and then the total was divided by the number of layers for a mean value that was independent of the number of slices selected. By using more layers, the accuracy was expected to improve by improving the statistical sampling; however each additional layer meant an increase in the duration of computation.” 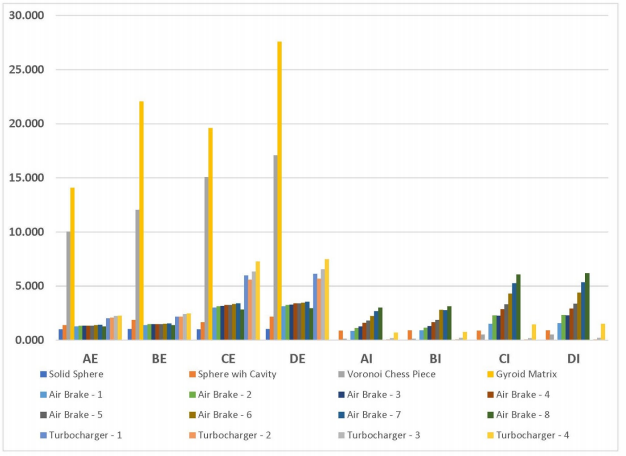 The complexity factor values for Algorithms A­D are shown for each of the benchmark castings. E indicates exterior. I indicates interior.

16 structures were used to conduct a test, ranging in geometrical complexity from simple spheres to a gyroid matrix and a Voronoi tesselation chess piece. The different castings were run through the complexity software, and the resulting data was compared to complexity scores assigned by previous work in which the scores were generated manually and related well with the decision as to which casting process was most suitable.

Of the four algorithms, Algorithm D provided results that “provide a decision boundary that was in line with the intuition of the authors as well as obvious extreme cases (sphere as a case of simplicity or a gyroid matrix for a case that can only be cast with the help of 3D printing),” according to researchers. 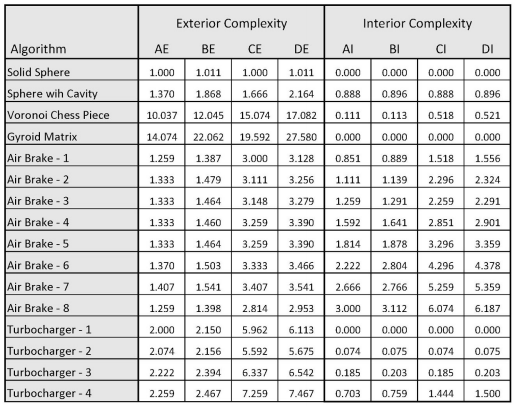 The most economical method was determined from the complexity and quantity of the parts being made. For example, for an air brake, 3DSP was the most cost effective regardless of level of complexity. However, 3DSPC was better for more complex objects or objects in quantities of 100 or higher. For castings of low complexity, FDMP was the best choice, while for quantities of 1,000 3DSPC was the cheapest for the full range of complexities.