Partnering for the Patient

With the help of his wife, Heidi, Dr. Frey runs Mighty Oak Medical in Englewood, California. There, they have created a patented technology called FIREFLY which gives surgeons the ability to place pedicle screw from spinal faster, simpler and more accurately while working around pivotal anatomical components like the spinal cord, nerves and blood vessels. Mighty Oak Medical has utilized 3D Systems‘ Healthcare Team, located in Littleton, Colorado, throughout this entire process.

“We needed a 3D printing partner that was known for quality, reliability and expertise in the medical device space,” says Heidi Frey. “3D Systems has been an amazing partner at every level—they are supportive, responsive and dedicated to excellence.”

3D Systems provides a wide variety of solution for the medical industry. Aside from their state-of-the-art 3D printers, these solutions include virtual reality simulators, 3D printed models, surgical instruments and surgical guides tailored to each individual patient. Having worked in collaboration with medical service and device providers for around 20 years, 3D Systems’ technologies have provided solutions for well over ten-thousand surgeries.

Mark Weimer and Dr. Frey were first introduced to each other by Weimer’s neuro surgeon who had been treating Weimer since his very first operation in 1984 which occurred following a fall from construction scaffolding, leaving him paralyzed. Weimer would go on to have another spinal surgery in 2001 in order to help correct his loss of muscle strength in his right arm. Weimer began working as an IT specialist in data warehousing following his initial surgery. Prior to his paralysis, Weimer was an extremely passionate hockey player. Fortunately for him, he was actually able to join a Colorado sled hockey program in 1996. 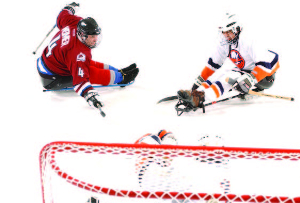 Weimer would go on to play for the 2000 national sled hockey team where they actually played a game on Lake Placid, home of the “Miracle on Ice” where the U.S.A. infamously defeated Russia in the 1980 Winter Olympics. In 2010, Weimer was selected to captain his team at the Sled Classic Championship – a tournament sponsored by the National Hockey League (NHL) and which his team would go on to win. One year later, Weimer served as the key player on the Colorado Avalanche Sled Hockey Team who won the 2011 National Sled Hockey Championship – a tournament ran by USA Hockey.

Following the 2011 championship, in which he both scored and assisted a goal, Weimer elected to retire from his playing career in sled hockey. Instead of continuing to play, he elected to take up coaching young sled hockey players and get his exercise by hand cycling. In 2012, Weimer’s feats and accomplishments were cemented into the history books as he was inducted into the Colorado Adaptive Sports Foundation Hall of Fame.

Ever since the accident occurred, Weimer was forced to deal with some moderate nerve and spinal. Unfortunately for him, this pain turned for the worse for him in 2014 when he began to experience excruciating pain in his quadriceps which in turn caused bowel and bladder issues. This is where Weimer’s neurosurgeon introduced him to Dr. Frey.

“As the years went by, Mark’s spinal fusion and his neurological condition caused the remaining discs and vertebrae below the fusion to deteriorate,” says Dr. Frey. “This caused further compression of the nerves and spinal cord, resulting in severe neuropathic pain.”

The preparation for Weimer’s surgery began with a simple CT scan of his spine. The results of the CT scan were sent over to 3D Systems. Once in their possession, the data was segmented by 3D Systems team in order to extract an accurate 3D representation of Weimer’s spinal anatomy. Both Dr. Frey and 3D Systems’ Director of Medical Services, Chris Beaudreau, afound his case to be much more complex than your typical spinal procedures.

“Mark had bone growth over the rods inserted from his previous surgery,” says Dr. Frey. “Although the rods were being removed, any disruption to the surrounding bone could affect the placement of the FIREFLY guides, so plenty of planning was needed to work around the anatomy.”

“Due to his previous surgical procedures, there were significant imaging artifacts within the CT scan that required extensive medical image processing in order to render the anatomical area of interest into three-dimensional digital models,” says Beaudreau. “It was also going to be an extensive spinal procedure, so instead of modeling two or three vertebrae, we needed to process nine vertebrae, the sacrum bone at the base of the spine, and both hips.” 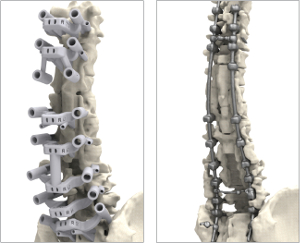 The renderings show custom, patient-specific guides for screw placement that allow the surgeon to safely avoid vital, complex spinal anatomy. In total, 10 guides were manufactured for Mark Weimer’s operation, each designed for a specific vertebral body. Once guides are in position, screws can be placed with a high degree of accuracy. The image on the left shows the surgical guides in place on the patient’s anatomy, before the hardware was affixed. The image on the right shows the post-operative placement of the spinal hardware.

After creating the 3D models of his spinal anatomy, 3D Systems passed them on to Might Oak Medical where they were used both to determine the trajectory of each pedicle screw that would be used and to help construct the 3D printed guides that would help to determine thee appropriate screw placement on his spine. The FIREFLY design was used by 3D Systems to print the pedicle screw guides for each specific vertebrae that needed surgical attention. They also printed a bone model for use in pre-surgical operations as well as to serve as a reference in the operating room.

On July 22nd, 2016, Mark Weimer underwent his operation, conducted by the Dr. Frey, at the Swedish Medical Center in Englewood, California. Upon his awakening after the operation, Weimer found that the pain in his quad muscles had subsided and that even the pains prior to the quadriceps had decreased dramatically.

“Mark is currently undergoing a rigorous rehabilitative process and is recovering nicely from his fusion surgery,” says Dr. Frey, who expects the recovery period to last about a year.

Weimer is now 63 years-old and continues to work in the IT field and hand-cycle for exercise. He now also enjoys watching his 2 grandsons play hockey.