Members of an aeronautical repair and maintenance crew have quite challenging jobs. The quality and accuracy of every part they service must meet very demanding safety requirements to ensure the safety of flight crews and passengers. They also must produce new parts and service old parts in an affordable manner. Northrop Grumman, based in El Segundo, California, has essentially mastered this challenged thanks to their investments into their Rapid Prototyping and Manufacturing (RP&M) team.

The team has developed an exceptional process for producing ideal modification tools in both a cost and time effective manner by utilizing the stereolithography (SLA) additive manufacturing technologies from 3D Systems. SLA technology was created by 3D Systems in the 1980’s and has been developed continuously to provide solutions across a vast variety of industries and applications. SLA printers transform liquid raw material into solids through the use of light. Because SLA prints don’t normally need struts or supports, these printers have various advantages in terms of accuracy, efficiency and the capability to produce complex objects in a single pass.

Prior to the development of additive manufacturing technologies, traditional manufacturing methods required a lengthy, and costly, process of cutting parts with production machines or even by hand. This process often involved a lot of trial and error as parts would have to be recreated multiple times until an appropriately accurate and functional prototype was successfully developed. Now, 3D printing technologies such as the Stereolithography technology used by Northrop Grumman’s RP&M team provide a much simpler, faster and cheaper method for producing these working prototypes. The constant development of 3D printing materials that are used in the creation of these rapid prototypes have allowed companies, like Northrop Grumman, to greatly improve their ability to produce end-use parts. This method is known as rapid manufacturing, and Northrop Grumman has certainly mastered it.

Today, Northrop Grumman has created over 700 tools using SLA 3D printers. Perhaps the most impressive of these tools is the aircraft repair kit that they have created. The kit is used to make modifications on aircraft in the field and reduces the require manual labor to an all-time minimum, where traditionally, this operation would require a lengthy and costly rebuilding process. According to Northrop Grumman’s Air Combat Systems Manager of Technology Applications, Chris Farren, “I liken it to surgery, we don’t have to disassemble nearly as much of the aircraft as we typically would.” 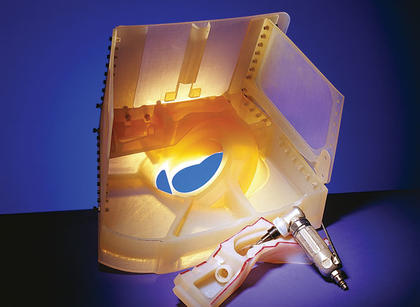 The repair kit was originally created by the RP&M team for the reshaping of a parts that was exceptionally hard to access unless an entire portion of an aircraft was torn down. If this section had to be removed, it would have potentially costs millions of dollars just to fix a single part. In order to create a kit capable of preventing this, the RP&M team had to put forth a significant effort to develop a way for a maintenance and repairman to fix the component inside the aircraft, without seeing what they were doing. Thanks to their team’s intricate efforts and the technological benefits of 3D Systems‘ Stereolithography 3D printing systems, this was made possible.

The RP&M team’s repair kit contains a set of tools that are used to shape metal, multiple guides and gauges that ensure the cuts made are accurate and efficient, as well as 2 ports: one that cools the metal during the cutting/shaping process and another that extracts the debris created by the cutting/shaping process. Because the repairman was incapable of seeing what he was repairing, the tool was used with the guides and gauges to find the correct location to start and conduct the reformation process.

“The operation worked flawlessly the first time, on both the left and right sides of the aircraft. This process was anywhere from 10 to 100 times less expensive than conventional methods, primarily because we were able to build this tool, test it and use it without having to go through an iterative development process… We bought our first SLA machine from 3D Systems roughly 10 years ago as a prototype development tool,” he explains. “We used it to build wind-tunnel models and development projects, but it spent most of its life in the engineering department… We are proposing the use of SLA technology for our next generation of aircraft… This is a reliable and cost-effective method for making the exact tool that you need for a given job. We have shattered the notion that only metallic tools are durable. With the current state of SLA technology, including the plastic resins on the market today, you can take tools directly out of an SLA machine and use them in the field.”

Northrop Grumman first bought their SLA 3D printing system around 3 years ago. Since then, their use of the technology has spread throughout the Integrated Systems/Air Combat Systems Business Area. According to Farren, this repair kit showcases the ultimate step in Northrop Grumman’s use of 3D printing technologies. While rapid manufacturing is now possible, the company won’t stop there, and is dedicated to the future advancement of these technologies across various departments.