On the NeoMetrix Technologies blog, we have covered a multitude of topics that include 3d printers, 3d printing and 3d scanning technology. We have seen examples of bio printing with everything from human tissue to human organs being created. 3d printers have taken the creation of these parts and tissues to the next level.

We are looking at a future where people in need of donors can have what they need printed when they need it the most. A future where body organs can be re-grown and replaced, a future that does not consist of waiting months and years for a suitable donor to appear.

Talking of body parts and the creation of them, an American artist has probably come up with the strangest piece of art we are likely to see for some time. An artist, Diemut Strebe, teamed up with scientists in an attempt to create a memorable unique piece of art. Diemut has amazingly 3d printed the chopped off ear of Dutch artist Vincent Van Gogh. What’s unique about this is that the 3d print is not made from plastic filament like many of the other 3d objects covered in our blog.

Diemut got in touch with the famous Dutch artist’s grandson Lieuwe van Gogh and used the grandson’s DNA. Initially, a letter that had been sealed by Vincent van Gogh was going to be used to extract DNA, but it turned out not to be his DNA on the envelope. 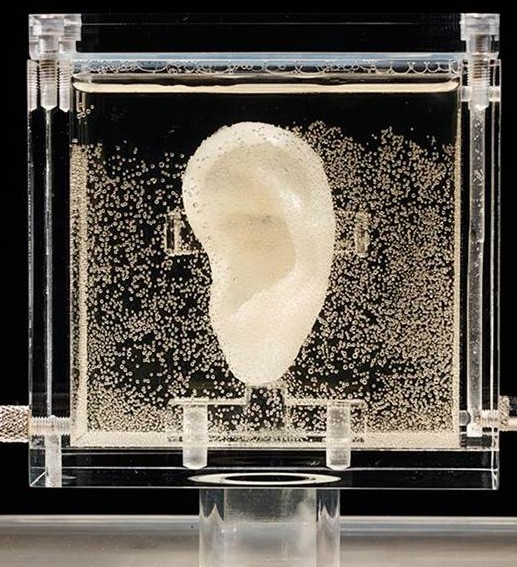 Vincent van Gogh hacked off his own ear in an act of love for his lady friend. Diemut was able to print off Van Gogh’s ear from living human tissue by using advanced 3d bio printing technology using a bio printer and specialized computer software. Once the ear was created it was sent to the Women’s Hospital in Brigham Boston so that the ear could grow into the form above.

The interesting thing about this creation made possible through 3d printing technology is that the ear is actually alive and can hear! The ear was on display in Germany at the Media Museum and the ear itself can be kept alive for years. What’s next ?!