3D Printed Wing from NYU Considered To Be The Perfect Wing

The dilemma regarding what would the ideal wing shape be for a fast flapping flight has been solved thanks to 3D printing and mathematicians from New York University.

A study published in the proceedings of the Royal Society states how a team from NYU’s Courant Institute of Mathematical Sciences aimed to improve the mechanics concerned with the motion of objects (kinematics). The researchers put it up to themselves to explore fixed-wing flight by altering the parameters of additively manufactured wings. Leif Ristroph, an assistant professor at the Courant Institute of Mathematical Sciences states

“We can simulate biological evolution in the lab by generating a population of wings of different shapes, have them compete to achieve some desired objective, in this case, speed, and then have the best wings ‘breed’ to make related shapes that do even better. Such a method could be used in related optimization problems, such as tuning kinematics or flexibility for flapping propulsion, and for flow–structure interactions.” 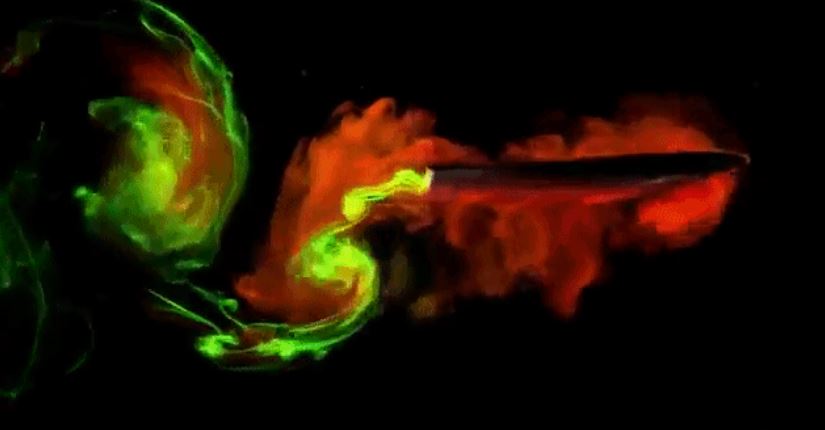 A 3D printed wing filled with fluorescent dyes flapping in a water tunnel. Clip via NYU

Within the NYU Applied Math Lab, the researchers 3D printed wings that could be flapped, these wings were used for a series of comparative tests. The channels of these wings were then filled with dyes, i.e., fluorescein and rhodamine, for flow visualization since these tests were going to be done in a water tank.

The experiments began in 2015 to demonstrate a scheme that modifies the cross-sectional shape of the speed of wings or hydrofoils – a lifting surface that operates in water) in forward heaving-and-plunging flight. Professor Ristroph states,

“This ‘survival of the fastest’ process automatically discovers a quickest teardrop-shaped wing that most effectively manipulates the flows to generate thrust, because we explored a large variety of shapes in our study, we were also able to identify exactly what aspects of the shape were most responsible for the strong performance of the fastest wings.”

Effect of shape on the forward flight of a heaving and plunging wing. (a) Depicts a race among wings or of varying cross-section. Image via NYU.

The NYU team found that the fastest wing shape has a razor-thin aerodynamic surface (trailing edge). This enables strong vortices or “swirling flows” during flapping.

“Improving the propulsion speed of a heaving wing through artificial evolution of shape” is co-authored by Sophie Ramananarivo, Thomas Mitchel, and Leif Ristroph. 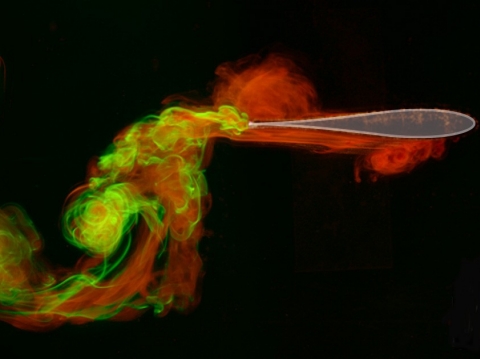 An experiment revealing ideal airfoil shapes for flapping flight, with the flows generated at the front part of the wing [red] and the rear [green] visualized using fluorescent dyes. Image via NYU.