It would be pretty safe to say, by the law of averages, a high percentage of people who read this blog have suffered a broken bone or two at some point in life. From experience we can agree that having the traditional cast set over the broken bone is both uncomfortable and can get incredibly itchy and over the weeks begin to smell. 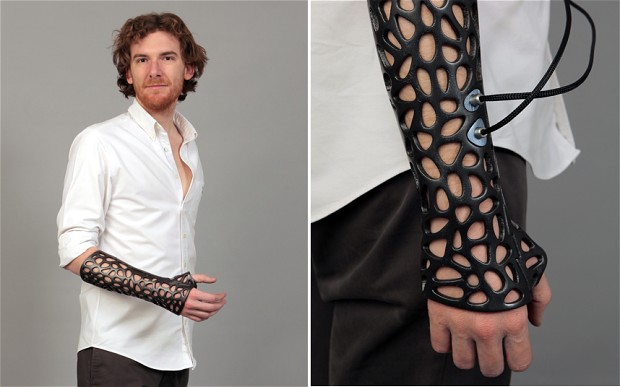 A Turkish industrial designer named Deniz Karasahin looked at 3D printers and 3D printing technology and begin his project to radicalize how casts are traditionally made. In turning to 3D printing Deniz was able design a new type of cast that could be used to aid the healing process while still supporting the broken bones.

The new 3D printed cast is called the “Osteoid” and uses ultra sound technology that helps speed up the process of healing, in fact, it could help heal those broken bones by up to 40% quicker than the current traditional methods.

As you can see, from the pictures above and below, the “Osteoid” has a lattice pattern that is peppered with holes. The material used in creating the 3D printed cast is both flexible and comfortable. The holes in the design make it easy for the skin to breath and reduces that dreaded itchy, unreachable spot. That means no more sticking pencils, knitting needles, or other long thin objects down the cast to reach that itch. 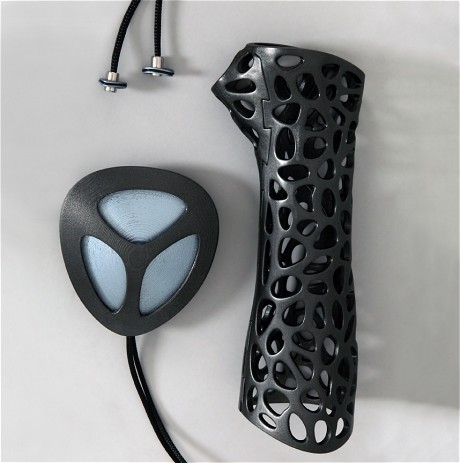 The designer of the “Osteoid” has said that his version of the cast is lighter, more flexible,  waterproof, and environmentally friendly. This clever cast was developed with the patient in mind, with the patient’s comfort and healing time, all was considered during the cast’s development.

Understanding each patient is different and by using a 3D scanner to capture data on patients broken limb and injured area means the cast is customized to each individual’s need. The data collected from the scan is put into modeling software used to perfect and modify the cast for the individual and their injury.