12 Year-Old Given New Fingers Thanks to 3D Printing

In the past, those who were in need of a prosthetic would have needed to pay big money. Thanks to 3d printers and 3d printing technology, high quality prosthetic limbs are now easier to make and afford than ever before. The progressive advancement of 3d printing technology has helped many industries and affected many lives, something 12-year-old Leon McCarthy knows too well. 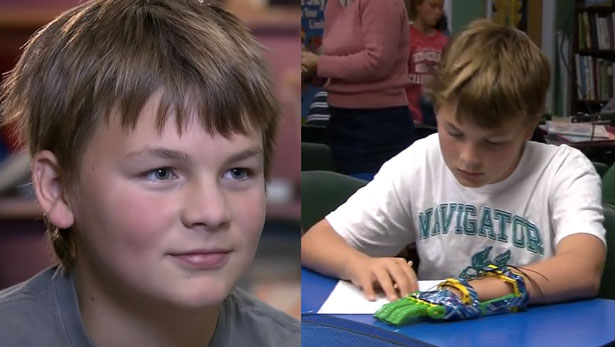 Leon McCarthy was born without fingers on his left hand due to complications in the womb before his birth. Unfortunately, there was a lack of blood flow when he was in his mother’s womb, meaning that his fingers on his left hand were unable to develop. Leon’s father had looked at traditional prosthetics and was alarmed at prices in excess of tens of thousands of dollars. It was the exorbitant cost that turned Leon’s dad to searching for a cheaper alternative.

While browsing the internet, Leon’s dad viewed a video on YouTube and was amazed at what he had seen. He had just viewed a video uploaded by inventor Ian Owen which had shown a partial finger prosthetic in action. Leon’s dad saw this as an excellent alternative to traditional prosthetic options and got in touch with Ian Owen, who had uploaded the video. After contacting Inventor Ian Owen, Leon’s dad was told all he would have to pay is the cost to cover the materials that were used in the 3d printing process.

Generally, the materials used by 3d printers are fairly inexpensive. 3d printers on the other hand can still be quite expensive to afford. However, Leon’s school owns one and made it available for his use. Leon’s life has been dramatically impacted by 3d printing technology and in his case, like many others, he has been offered a new hope and lease on life.

Things like being able to ride a bike and grip the handle bars, or even grip a ball and pencil are now achievable for this young man. As he grows older and his bones and hands grow, a new prototype can be easily made to work along his growth rate. Leon’s needs have been met by a technology that has yet to progress fully to its potential.